Go for a diesel Toyota Avensis saloon and you’ll get good fuel economy for long motorway journeys. Perhaps because of its reputation for reliability, the Avensis is sought-after secondhand and has pretty strong resale values, beating not only the Ford Mondeo and Vauxhall Insignia, but also the Volkswagen Passat saloon. This is likely helped by Toyota's fantastic five-year/100,000-mile warranty, which beats the three years' cover offered on most rivals.

Avensis drivers are expected to cover a high annual mileage, and for these a diesel engine will be by far the best choice. The most frugal of the range is the 1.6-litre, which can return up to 67.3mpg fuel economy while emitting 108g/km of CO2. This makes it the top choice for company-car drivers, thanks to a Benefit-in-Kind (BiK) band of 21%. Every Toyota Avensis costs £140 in annual road tax.

Further up the range is a 2.0-litre diesel still capable of 62.8mpg and emitting 119g/km of CO2 on 17-inch wheels, resulting in a 23% BiK rating. The larger 18-inch alloy wheels increase emissions and therefore BiK increases to 24%, but there's no fuel-sapping automatic gearbox option for either of the diesels. 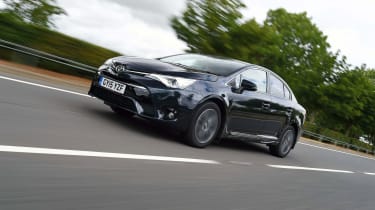 The 1.8-litre petrol engine is available with either a six-speed manual or a six-speed automatic gearbox. The manual, with claimed fuel economy of up to 47.1mpg, is a smidge less economical than the automatic, which claims to return 47.9mpg. CO2 emissions are from 138g/km, so the petrol starts in BiK band 24%.

Toyota has a reputation for making economical cars, but if you’re looking at an Avensis, then there are more efficient options available. Both the Volkswagen Passat and Ford Mondeo offer 1.6-litre diesel engines capable of higher MPG, and the Mondeo's is particularly good, returning 78.5mpg.

Cheapest to insure are the petrol models, which fall into group 18. The diesels are rated in groups 19 to 21, so premiums will be a little higher there.

Toyota has a great record for reliability and backs this up with an impressive warranty right across the range. Its cars are covered for five years or 100,000 miles, whichever comes sooner. Most of its rivals offer warranties that only cover you for the first three years of ownership. Also included in the warranty are 12 years' anti-corrosion protection and a three-year paintwork guarantee.