Large windows with relatively thin pillars and a wide rear screen means visibility is rarely an issue in the Toyota Avensis. But at 4.7 metres long, it's a bit unwieldy, so it's good that a reversing camera is available on most trims.

You can tell the Avensis was designed for long trips – with decent rear headroom and legroom, your back-seat passengers shouldn't mind extended journeys. The lack of a transmission tunnel means even someone sitting in the central rear seat will have plenty of space for their feet. 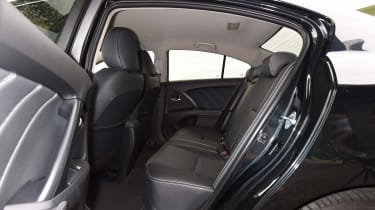 There are plenty of cubbyholes dotted around the interior, including a large glovebox and a huge central storage area between the front seats. Regular motorway travellers might find the cup-holders disappointing, though, as they're just too slim to hold anything worthwhile.

The Avensis has a large 509-litre boot, but access is a little hampered by its conventional saloon bootlid, allowing a narrower opening than on the Ford Mondeo or Vauxhall Insignia – both of which boast a more practical hatchback tailgate. From a saloon perspective, the Avensis is beaten by the Volkswagen Passat in terms of boot space. While the Avensis saloon is fine for suitcases, it won't be suited to moving bulky items such as furniture – in this case, the Toyota Avensis Tourer estate would be a better bet. 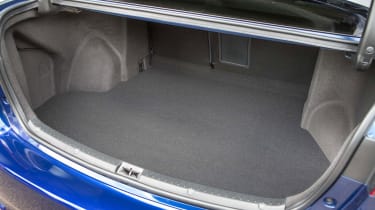 For more space, you can easily fold down the 60:40 split-folding rear seats, which drop at the touch of a button and increase luggage room to an impressive 1,320 litres. This configuration can be particularly useful for carrying long items such as skis or fence panels. The folding seats come as standard on all trims.

The Avensis saloon has a maximum braked towing capacity ranging from 1,500kg with a 1.8-litre petrol up to 1,800kg if the 2.0-litre diesel is fitted.