The Toyota name is traditionally associated with reliability, while the Toyota C-HR has cutting-edge safety technology

The Toyota CH-R featured in our 2020 Driver Power owner satisfaction survey, achieving a decent 19th place overall out of 75 cars. Owners were impressed with its reliability, as well as its styling, economy and driving experience.

Toyota as a brand fared even better, coming sixth out of a total of 30 car manufacturers in the 2020 survey. It finished an impressive third in the running-costs category for the second year running. Owners love the fuel economy and impressively low servicing bills. Reliability is rated strongly, as is build quality. The only real criticisms relate to performance, practicality and less than exciting interiors.

Beneath the bold exterior that we hope ushers in a new era of imaginatively designed Toyotas, the engineering is essentially tried and tested. There’s little in the mechanical makeup of the new car likely to cause concern over reliability or longevity.

The platform itself is shared by the Toyota Prius, a car beloved by urban taxi companies that rack up high mileages every year and for whom dependability is a must. This extends to the hybrid powertrain – Toyota was one of the pioneers of the mass-production hybrid car and these systems are widely regarded as trouble-free. Likewise, the 1.2-litre turbocharged petrol engine was proven elsewhere before use in the C-HR, so if you’re buying a used C-HR with this engine, you can be confident in its reliability. 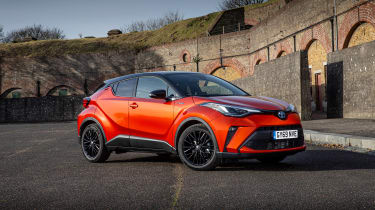 The C-HR features all the standard safety kit Toyota can muster. This includes ‘Safety Sense’ which brings together adaptive cruise control and autonomous emergency braking along with pedestrian detection. Lane-departure warning, auto-dipping headlights and road-sign recognition are also featured.

The C-HR scored a reassuring five out of five stars in Euro NCAP crash-testing. Seven airbags are provided and stability control is included on all models. The Excel and Dynamic models can also be optionally specified with rear cross-traffic alert and blind-spot monitoring to further enhance safety.