Noisy, strident 1.8-litre hybrid engine detracts from tidy handling of the Toyota C-HR, but the 2.0-litre is better

Toyota had European tastes in mind from the outset when it developed the C-HR and you can instantly tell this from a spell behind the wheel. This is clearly a car that was intended not only to cope with the bumpy, twisting roads found on mainland Europe and in the UK, but also to demonstrate an agility its rivals can’t match.

This is all thanks to its TNGA (Toyota New Global Architecture) platform, which is also employed by the latest Toyota Prius but to somewhat less exciting effect. Unlike that popular low-emissions hatchback, the C-HR is a genuinely engaging car to drive, rewarding you for your efforts at the wheel. It’s all the more impressive that this has been achieved while preserving great ride quality – a feat made possible thanks to some innovative motorsport-inspired suspension design.

Despite its raised ride height providing you with a lofty perch, the C-HR maintains a low centre of gravity, which helps it stay level in corners, with little trace of the pronounced body lean that can spoil the fun in cars like the Nissan Qashqai. Grip is plentiful, too. All models are front-wheel drive by default and are only available with a CVT automatic gearbox.

Every model offers Sport, Normal and Eco driving modes. These change the weight of the steering, the responsiveness of the engine to the accelerator pedal and – where fitted – the points at which the CVT automatic gearbox changes gear. However, we were perfectly happy with the way the car responded in Normal and found ourselves largely ignoring the other modes. No matter which mode is selected, the steering of the C-HR is well weighted and enjoyable to use, and combined with a high driving position for a good view ahead, the Toyota is very easy to place on the road, for greater confidence in corners. 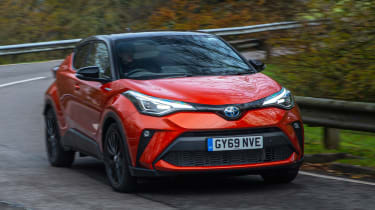 Toyota predicted that 75% of all C-HRs sold would be the 1.8-litre petrol-electric hybrid and they were about right; eight out of 10 UK buyers opted for the hybrid. It’ll no doubt particularly appeal to urban drivers making short journeys – slow progress in traffic jams is almost totally silent under electric power and the CVT automatic gearbox makes for relaxed progress. It won’t endear itself to enthusiastic drivers, though, with the gearbox proving slow to respond when changes are necessary. Putting it in Sports mode does help, but tends to lead to jerky progress.

Although we’ve been quite impressed by this setup in the Prius, in the C-HR it feels a little out of its depth, with even fairly gentle acceleration causing engine revs to soar and an uncomfortably loud din to echo through the car. Also, unlike the Prius, the electric motor can’t be employed to noticeably boost acceleration at low speeds, nor does the hybrid system provide enough current for pure electric running at anything above parking speeds. In theory, the batteries provide enough power for a mile of all-electric running, but in reality, you have to be very gentle with the accelerator to avoid the petrol engine cutting in.

The 182bhp 2.0-litre engine has an additional 62bhp and is the most powerful C-HR on sale. It’s capable of 0-62mph in 8.2 seconds and feels less strained than the 1.8-litre model. Toyota have had to re-engineer the steering and suspension to allow for the slightly heavier 2.0-litre engine. The changes are a success, making the 2.0-litre not only the better of the two C-HR models to drive, but one of the best crossovers to drive too. There’s still a drone from the CVT transmission if you accelerate very hard, but it’s less obvious because less throttle is usually required. Since the facelift in 2019, the C-HR has better soundproofing, as well as lighter lithium-ion batteries (the pre-facelift 1.8-litre hybrid model used a nickel-metal hydride battery). 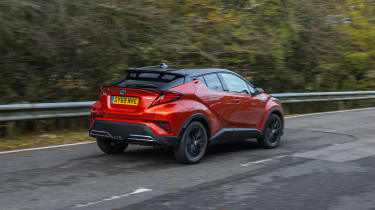 As a used buy, the C-HR 1.2-litre turbo (sold from 2016-19) with a manual gearbox and front wheel drive is still a sensible choice. It was our favourite powertrain for driving fun and the engine we felt best suited the nature of the C-HR. With this setup, it wasn’t weighed down by the extra mass of the hybrid’s batteries and electric motors, and this gives the car better reflexes. The steering becomes more responsive and the car feels lighter on its feet.

The 1.2-litre turbo serves up 114bhp and delivers smooth, brisk acceleration. Pushing hard can lead to it sounding strained, but you can make swift progress without working the engine to its limits. It’s particularly suited to the six-speed manual gearbox, which has a light, accurate shift action. It also benefits from Toyota’s Intelligent Manual Transmission system, which momentarily blips the throttle when you change down a gear – although changing gear very quickly can catch it out.

Going for the CVT automatic gearbox may be a labour-saving choice, and it is fairly responsive, offering a choice of ‘virtual’ gears for manual selection if you want. But the actual manual gearbox is so nice to use, we prefer its direct, hands-on nature.