The Corolla is amongst the very best hybrids we've driven, with a surprisingly good chassis that offers plenty of agility and grip, and is a far cry from the old Auris in this regard. On the whole refinement is pretty good – partly helped by the potential electric running around town – although the GR Sport, with its larger wheels, does have a firmer ride quality than lesser Corolla models, but it's never uncomfortable.

As always, the hybrid powertrain and CVT automatic gearbox don't really go hand-in-hand with enthusiastic driving, due to the 'rubber-band' feel, but it works especially well in town. Here the Corolla is smooth and you can use its electric propulsion at low speeds to get around using hardly any petrol.

Shared with the Toyota C-HR and Toyota Prius, the familiar 1.8-litre hybrid has 120bhp and gets it from 0-62mph in just under 11 seconds. Those are respectable figures, and while almost any Golf is faster in a straight line on paper, the lack of gearchanges in the Corolla means it's easy to nip away from the lights. Once at the motorway speed limit, the 1.8-litre feels quite relaxed, with just over 2,000rpm showing on the rev counter.

With 178bhp, the new 2.0-litre hybrid powertrain debuting in the Corolla has enough power to rival 2.0-litre diesel versions of the Volkswagen Golf and the 1.5-litre EcoBoost Ford Focus. It gets from 0-62mph in a brisk 7.9 seconds, fitted with the same CVT gearbox. Because of the latter, it still feels less punchy and direct than rivals with a manual or dual-clutch transmission, with stabs of the accelerator seeing revs flare before forward momentum gradually builds. To remedy this, there are six 'virtual' gears and steering wheel mounted paddles, but the changes don't feel particularly snappy.

As a result, the 2.0-litre’s main advantage over the smaller engine is that it feels more effortless and refined. This is particularly the case on the motorway, where the engine isn't working as hard and is almost silent as a result. 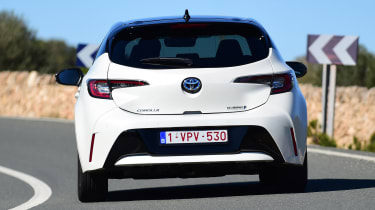 It was initially thought that a traditional petrol wouldn't be available, but Toyota decided to offer its 1.2-litre turbo in the Corolla after all. It may only have had 114bhp, but thanks to less weight and a six-speed manual gearbox it was the quickest Corolla, managing the dash from 0-62mph in 9.3 seconds, between the two hybrids. The 1.2-litre petrol engine was discontinued less than a year after the Corolla was introduced, however, meaning the Corolla is now hybrid-only.