It's stylish and comfortable inside, but the infotainment system is a let down

Soft, padded materials and neat stitching create an interior ambiance that's quite a bit classier than that of the outgoing Toyota Auris. It's more than a match for mainstream rivals like the Ford Focus, Vauxhall Astra and Kia Ceed too, if not quite on a par with the imperious Golf.

The Corolla's dashboard has a modern and smart horizontal design, with a 'tablet style' infotainment screen not far from your line of sight. It lacks the all-digital instruments of some rivals, but a large screen between the gauges provides information with bright graphics. 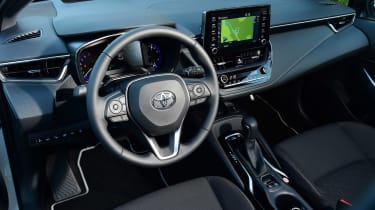 Five trim levels are on offer, sticking with Toyota's favoured grades from existing models. Icon kicks things off with the Toyota Touch 2 eight-inch infotainment screen, 16-inch alloy wheels, LED headlights, heated front seats, a rear-view camera and DAB radio, making it well-positioned among rivals like the Kia Ceed. Icon Tech boasts more, well, technology with sat-nav and voice control added to the roster, along with a seven-inch colour screen between the instrument dials and tech to make parking easier.

GR Sport is next. As the name implies, it's a sportily styled model that takes design cues from Toyota's GR high performance models, and is similar in approach to Ford's ST-Line and Volkswagen's R-Line models. The Corolla GR Sport features a different front bumper and rear bumper with twin fake exhausts, 18-inch alloy wheels and red-edged black centre caps. On the inside, there are a pair of deeply bolstered sports seats and a colour head-up display.

Toyota doesn't typically produce long options lists, but you can upgrade the Design trim with an opening panoramic sunroof, while Excel Corollas can come with a contrasting roof colour and eigh-speaker JBL sound system.

While the Corolla certainly isn't lacking in technology, some of its most important features lag well behind rivals. The main culprit is the infotainment system, that has a large eight-inch screen and better pixel density than we've seen from Toyota previously, but still comes with a poor and dated user interface. From early 2020 onwards, Toyota updated the Corolla’s infotainment system to include Apple CarPlay and Android Auto smartphone connectivity across the range.