In many ways the Toyota Corolla is the right car at the right time. As diesel engines face a PR headwind and higher taxation, here's a petrol-only model that's predominantly a hybrid too. Toyota has chosen to stick with its 'self-charging' systems here, so unlike a plug-in hybrid or battery electric car, there's no need to connect the Corolla to a charger while out and about or to your home electricity supply overnight. Instead, its small battery pack is recharged every time you slow down, using recuperated kinetic energy. It can’t drive on electric power alone like a plug-in hybrid but there are significant fuel savings and the smaller batter means less weight.

Choose the 1.8-litre hybrid - sacrificing some performance - and the Corolla is at its cheapest to run. Official figures are 52.4mpg to 62.7mpg depending on the alloy wheels fitted. Its biggest advantage, though, is CO2 emissions ranging from 101 to 116g/km - figures no diesel rivals can match. Company-car drivers will need a plug-in hybrid or EV to better it's mid-range BiK rating.

The more powerful 2.0-litre hybrid is faster and still usefully more efficient than most family hatchbacks, returning up to 57.6mpg and emitting 111-127g/km, which place it in a similar BiK band to the smaller engine. 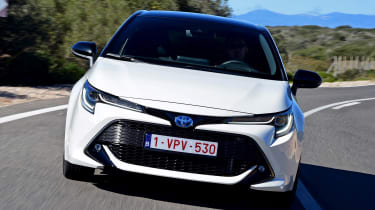 In early 2020, the conventional 1.2-litre petrol engine was dropped from the Corolla line-up, meaning it's now only available as a hybrid – a fact that makes it unique in the family hatchback class.

Insurance groups haven't been confirmed for the Corolla yet, but we'd expect them to be on a par with rivals, or lower. That's especially the case given its economy-focussed personality, safety features and Toyota's excellent reliability record - all factors that can reduce insurance risks, helping to bring down groupings.

Toyota scores well here, providing new cars with a five-year/100,000-mile warranty that's sure to reassure owners. It beats offerings from most European manufacturers, but Hyundai provides a five-year/unlimited mileage deal.

Toyota offers fixed-price servicing and has dealers dotted all over the country, making it a short hop for scheduled work in most areas. Hybrid models tend to be quite easy on consumable parts too, including tyres and brakes, while there's no clutch to replace.