Given the Corsa’s traditional customer base, the new one needs to be affordable to own and run above almost anything else. That's especially the case now that Vauxhall has withdrawn the Adam and Viva, making the Corsa the cheapest car in its range. As Ford Fiesta prices have crept up in recent years, the Corsa can appeal to those looking to save some cash. 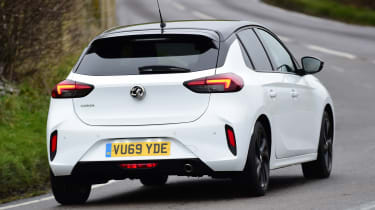 Along with the news that the fifth Corsa will be available as an electric car for the first time, a significant point about the standard model is that it tips the scales at just under a tonne in its lightest trims. Weight saving is a great way of saving fuel, as less power is required to move the car. The new Corsa is also more aerodynamic, with features like an active shutter in the grille that closes at higher speeds, a smooth underbody and a rear spoiler that reduces drag.

The Corsa is fitted with either a petrol or diesel engine, and both use advanced technology shared with Peugeot. The turbocharged petrol is our pick - not only is it cheaper to buy, but its CO2 emissions from just 125-134g/km make it very affordable for business car buyers. Its fuel-efficiency of 47.9-52.3mpg is also just ahead of the 50mpg claimed by the 1.0-litre Ford Fiesta EcoBoost. The non-turbo 74bhp petrol can manage slightly more at 53.3mpg.

A 1.5-litre diesel engine manages 70.6mpg and emits 108-117g/km but we don't think it offers significant enough gains for it to make sense for many buyers, costing around £1,200 more to buy. Long-distance motorway drivers could eventually see the benefits but this isn't really the way most Corsas will be used.

Road tax will cost £150 a year for every Corsa, except for the Corsa-e, which will be free to tax thanks to zero CO2 emissions. 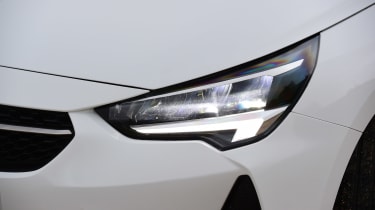 No insurance groups have been confirmed but the Vauxhall is traditionally a top choice for young drivers and instructors, who'll be hoping for affordable ratings. The Ford Fiesta starts in group five, so Vauxhall will be hoping to have models in the same group or lower.

Vauxhall offers a fairly ordinary three-year/100,000-mile warranty, which is comparable with rivals like Volkswagen but lags behind the five-year warranties of Hyundai and Toyota, as well as Kia's seven-year warranty.

Expect new servicing deals to be announced but the old Corsa could be maintained under its Vauxhall Care package for a cost of around £20 a month.