The safety and reliability of the latest Vauxhall Insignia Sports Tourer are as-yet untested, but features stack up well

Owner satisfaction is one area in which Vauxhall will want to make solid gains for the latest Insignia Sports Tourer – the long-established British brand has suffered something of a chequered reputation in recent years. However – with Vauxhall and its German cousin Opel now owned by the French PSA consortium (which also encompasses Peugeot, Citroen and DS), the future looks bright.

With generous equipment running to standard autonomous emergency braking on all models, the Insignia put in a strong showing during Euro NCAP crash-testing, with good results.

Vauxhall’s showing in our 2018 Driver Power owner satisfaction survey was a rather mixed affair. The brand came 22nd out of 26 manufacturers overall, but just 9.9% of owners reported a fault within the first year of ownership, suggesting reliability isn’t the main reason for its poor result.

With the latest Insignia being such a recent model, we expect Vauxhall to make big strides forward in owner satisfaction, and our experiences so far certainly support the notion that big efforts have been made in build quality, equipment and interior comfort. 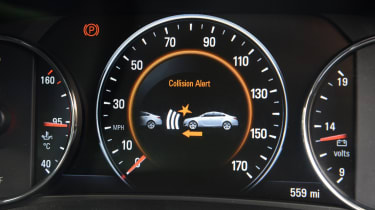 Euro NCAP has independently crash-tested the latest Insignia, awarding it the full five stars. A score of 93% for adult occupant protection is particularly impressive, and the Vauxhall performed well across the board, without any weak areas.

The Insignia has been developed to meet the requirements of several global markets. To that end, there’s a lot of standard safety equipment on every model, with autonomous emergency braking across the range – a boon in reducing the likelihood of low-speed urban collisions.

Another impressive standard feature is Vauxhall’s OnStar service. Linked to a mobile-phone SIM card, it can automatically make contact with the emergency services if a collision is detected, but this service is due to be cancelled in 2020. Anti-collision assist and lane-departure warning are on hand, while cruise control on every model helps to reduce the driver’s workload.