The Vauxhall Insignia Sports Tourer is reasonably economical with the smallest diesel engine fitted, but it can’t match class leaders

A low asking price has little value if your savings are undone by steep running costs. Fortunately, Vauxhall has ensured that the private and business users it hopes will embrace the Insignia Sports Tourer will find its running costs acceptable.

The Insignia Sports Tourer engine range has something for almost any buyer. There’s a clear choice between economy and power, although the mid-range engines manage a decent stab at both.

Unsurprisingly, the least powerful diesel is the most economical in the range. The 1.6-litre 108bhp engine returns 65.7mpg and CO2 emissions are the lowest of the bunch, at 112g/km. This translates to a 27% Benefit-in-Kind (BiK) rate for company-car drivers.

However, the 134bhp version of the same engine offers a useful performance boost and doesn’t fall far behind on economy, with 62.8mpg possible. CO2 emissions increase to 119g/km, though, and this pushes it into the 28% BiK bracket. Going for an automatic gearbox with this engine drops economy to 54.3mpg, while CO2 emissions are elevated to 137g/km, for a steep 32% BiK bracket. 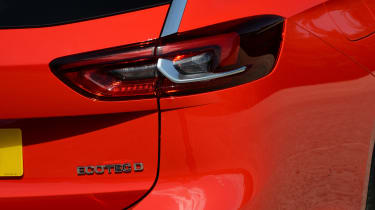 Stepping up to the 168bhp 2.0-litre diesel penalises economy still further – its 53.3mpg is a fair way behind the Volkswagen Passat, although its engine does make do with just 148bhp. BiK is rated at 32%, owing to 139g/km CO2 emissions. Adding an automatic gearbox increases fuel consumption to the wrong side of 50mpg and 150g/km emissions in this case mean a 35% BiK rating.

The 1.5-litre petrol engines can’t match the economy of the diesels – the 138bhp version returns 47.1mpg and the 163bhp car can manage 46.3mpg. Both are in the 28% BiK bracket. The 44mpg 1.6-litre turbo is quicker, without being much less economical, but the high-performance choice is the 256bhp 2.0-litre turbo. However, its 32.5mpg fuel economy and 37% BiK rating mean you have to really need four-wheel drive to make this engine worthwhile.

Every Insignia Sports Tourer will cost £140 a year in road tax.

The Association of British Insurers (ABI) has placed the 134bhp diesel in group 16 and the 168bhp engine in group 20. The petrol GSi is the most powerful Insignia model yet announced and sits in group 27.

Vauxhall is aware that its customers vary hugely in terms of annual mileage and the types of journey they make. While every model needs servicing at least annually, your local dealer can draw up a servicing package to suit your precise requirements, helping you to budget for routine maintenance. Choose its Vauxhall Care package for around £20 per month and the first three services, roadside assistance and the first MOT are all covered.

Vauxhall’s three-year/60,000-mile warranty is a match for that provided by Volkswagen, Audi and Skoda, but nothing like as generous as the five-year guarantees offered by Hyundai and Toyota, nor Kia’s seven-year policy.