The latest Passat Estate has grown inside, but shrunk outside. There’s more space in the boot and passenger compartment, yet the car is 2mm shorter than the previous model. Clever packaging and an extended wheelbase (the distance between the front and rear wheels) have helped create more room inside, while the boot has grown by a useful 47 litres.

The seats are comfortable – and all versions have height adjustment. There’s a decent amount of movement in the steering wheel, too, ensuring it’s not too difficult to get comfortable. However, if you go for SE trim or above, you’ll benefit from VW’s 'ergoComfort' seats, which allow several planes of adjustment for the perfect driving position.

Excluding the S and GTE trims, the Passat Estate is available with self-levelling suspension, which will help if you need to carry particularly heavy loads. 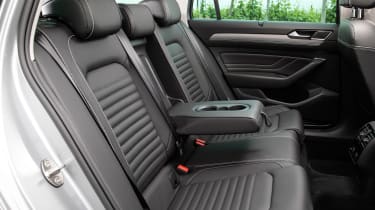 Despite being 2mm shorter overall than the model it replaces, the new Volkswagen Passat estate is actually considerably more spacious inside. VW claims passenger room has improved by 33mm, which means more knee and headroom both in the front and the back.

Like the old model, the big rear doors open nice and wide, making it easy to load things like child seats into the back. ISOFIX child-seat mounts are standard on all models, too.

Interior storage isn’t bad, but it isn’t great either. There’s a big glovebox and some large door pockets – but none of the clever overhead cubbies or secret compartments you find on some of the more innovative MPVs. 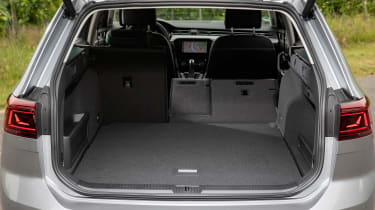 Boot space shouldn’t be an issue in the Passat Estate. It’s really big – much bigger than rivals – carrying 650 litres with the rear seats in place. Compare that to the Ford Mondeo estate (525 litres) and the Mazda6 Tourer (506 litres) and it’s easy to see just how impressive the Passat is in this area.

Drop the 60:40 split-folding rear seats down and you’ll free up a whopping 1,780 litres, which again is more than its closest rivals. However, the Skoda Superb Estate is even bigger, with a 660-litre boot and 1,950-litre maximum luggage space with the rear seats folded down.

One notable annoyance is that the seat squabs are fixed, so they don’t lie completely flat when folded. This limits practicality slightly, but shouldn’t cause too many problems in the local IKEA car park – thanks to the car’s square shape and high roofline, there’s more than enough space for your family’s fair share of flat-pack furniture.