The Volkswagen Passat estate has always offered a fairly middle-of-the-road driving experience. It was never as much fun as a Ford Mondeo, yet felt more grown-up than a Vauxhall Insignia. However, this eighth-generation model shares its mechanical basis with the Volkswagen Golf, Audi A3 and SEAT Leon, which bodes well for those looking for a car capable of putting a smile on their face.

VW engineers have reduced weight by 85kg compared to the outgoing car, which has considerably improved both handling and fuel consumption. Like the saloon, the estate has been stiffened to make it feel more agile and fun to drive, while the steering has been improved, too, with a weightier feel that gives the Passat a genuinely sporty nature.

These changes haven’t made the Passat noisy at high speeds or difficult to drive around town. The latest Volkswagen Passat estate is quieter than ever at motorway speeds – in fact, we’d go as far as to say it’s one of the quietest estate cars you can buy. High-spec models with larger 18 and 19-inch alloy wheels sacrifice a certain degree of comfort, but that can be rectified by selecting Dynamic Chassis Control, which allows you to stiffen or soften the suspension at the touch of a button. 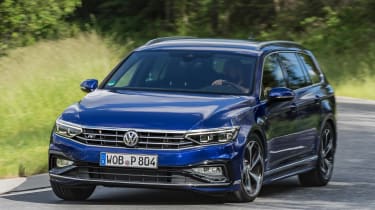 All the Passat's diesel engines feel powerful, and even the entry-level 1.6-litre TDI model isn’t underpowered. However, the 148bhp 2.0-litre TDI model is our favourite all-rounder, combining a brisk 0-62mph time of 8.9 seconds with a top speed of 135mph. Overtaking is easy and safe, but this engine is particularly impressive at high speeds, where it’s quiet, smooth and a great motorway mile-muncher.

The mid-range 187bhp TDI fitted with the DSG automatic gearbox goes from 0-62mph in 7.9 seconds, while the flagship 237bhp BiTDI model is faster still. It will keep up many so-called sports cars in a straight line without being any noisier than the less powerful diesels. Only available with the DSG automatic gearbox and four-wheel drive, it’ll cover 0-62mph in just 6.3 seconds and go on to a top speed of 147mph. This model is ideal for the speed-limit-free German autobahn, but most of its performance will be superfluous on UK roads. 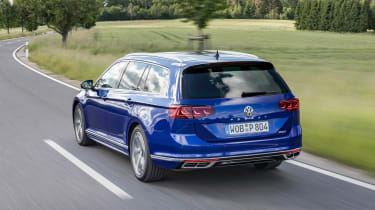 There’s just one petrol engine available with the Passat, but the 1.5-litre TSI EVO is well matched to the car. With 148bhp it has just enough power to give the big estate convincing acceleration, plus it’s smooth and quiet enough to not sound strained when you work it hard. Make no mistake, it’s no performance car - the 2.0-litre diesels feel more muscular - but its refined nature enhances the Passat’s hushed refinement on long motorway runs.

With a combined 215bhp from its petrol and electric motors and a 0-62mph time of under eight seconds, it would be easy to think the GTE plug-in hybrid is one of the sportiest Passat Estates to buy but that would be missing the point somewhat, as the GTE is at its best when driven more sedately. In its electric mode the Passat is quiet and easy to drive but the DSG automatic could be smoother at low speeds. You can hold onto the battery pack's charge until you reach a congested or urban area.