Life with a Volkswagen Passat comes complete with low running costs and affordable servicing. VW reckons 80% of sales will be to fleet buyers, so it comes as no surprise to find that key models bring you low BiK (Benefit-in-Kind) company-car tax rates. Second-hand prices should be good, too, with the Passat enjoying similar residual values to the upmarket Audi A4 Avant.

The 148bhp 1.5-litre is currently the only petrol engine available in the Passat, and it can return anything between 37.7mpg and 44.8mpg depending on trim level and transmission - there’s a choice of six-speed manual or seven-speed DSG twin-clutch automatic. Regardless of gearbox, this engine gets a clever cylinder deactivation feature that automatically cuts two of its four cylinders during light throttle applications. 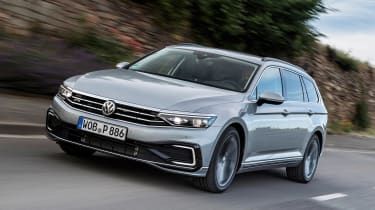 The 1.6-litre diesel should be the most efficient engine in the Passat line-up but despite only coming with a six-speed manual gearbox, the combination of its relatively lowly 118bhp power output and the VW’s bulky body means it’s actually less efficient than the 2.0-litre diesel, with official figures from 47.1mpg to 50.4mpg. And while its 112g/km CO2 emissions are very slightly lower than the bigger engine’s, it falls into the same 30% benefit-in-kind company car bracket.

GT and R-Line models are also available with a 187bhp version of this engine. Equipped exclusively with the seven-speed DSG, in the real world it’s not much quicker than the 148bhp version, yet delivers poorer fuel economy of up to 48.7mpg, plus higher CO2 emissions of 120g/km, which place it in the 32% company car tax bracket.

A super-quick 237bhp twin-turbo diesel engine is available with the GT and R-Line specifications, and it comes with four-wheel drive and a DSG automatic gearbox as standard. This bumps CO2 output to 150g/km and lifts BiK to 37%. What’s more, this model will return less than 40mpg.

Far more company-car and environmentally friendly, the Passat Estate GTE plug-in hybrid could account for as many as a quarter of sales, according to VW. It gained a higher capacity 13kWh battery pack for 2019, increasing its maximum zero-emissions driving range to around 35 miles. Paired with a 1.4-litre petrol engine and DSG automatic gearbox, it can return around 140mpg and emits well under 50g/km of CO2, qualifying it for low 19% BiK and access to low emissions zones. It takes just over three hours to charge from an AC source, or around five hours from a three-pin plug. 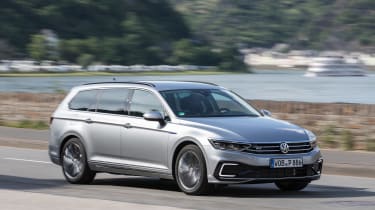 Insurance groups for the Passat Estate range from 12 for the 1.6-litre TDI SE Business to a quite high 28 for the range-topping 2.0-litre BiTDI 4MOTION R-Line. Interestingly, the basic 1.6-litre TDI S is in group 15. For comparison, the least expensive BMW 3 Series falls into group 20.

All Volkswagen Passat models have a three-year/60,000-mile warranty as standard. Unfortunately, this is pretty much the minimum buyers have come to expect – Hyundai and Toyota offer five-year guarantees, while industry leader Kia guarantees your new car for seven. However, considering 80% of buyers will be company-car drivers, this is unlikely to make much difference, as most of them change their car every three years anyway.

Volkswagen offers fixed-price servicing on all models with engines up to and including 2.0-litres – your local dealer will be pleased to give you a quote. Alternatively, you can pay for your servicing on a monthly basis with a Volkswagen Service plan.