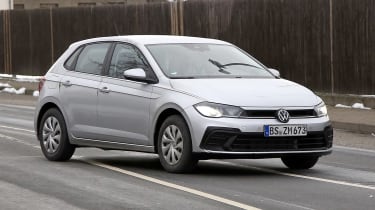 The Volkswagen Polo hatchback is due to get a facelift this year. We expect to see it launched in the next few months, given that the car has now been spotted undisguised out on the road.

Despite many of its rivals improving, the VW Polo is still one of the best superminis to buy. It’s a slightly more upmarket competitor to the Renault Clio, Ford Fiesta, Toyota Yaris and SEAT Ibiza. Prices currently start from just over £17,000 but we’d expect a slight rise for the facelifted car.

Styling changes can be spotted on the front and rear ends of the car. The headlights are reshaped and the tail-lights look to be inspired by the latest Volkswagen Golf, while both bumpers are new as well. 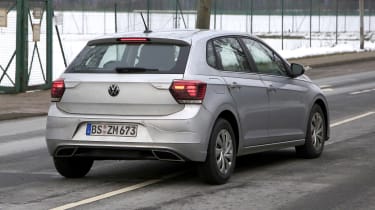 While this pre-production model doesn’t necessarily represent the final spec delivered to showrooms, it’s interesting to see that it features LED headlights. Currently a £1,000 option, the new Polo may get these fitted as standard, at least on some trim levels. Volkswagen’s digital instrument cluster is likely to be more widely available across the range too.

The Polo’s engine range currently consists of three 1.0-litre petrol engines, and we expect mild-hybrid technology will be fitted to the most powerful 108bhp version. This ‘eTSI’ engine is fitted to the latest Golf and its derivatives, and would be a great fit in the Polo. Fuel economy would be slightly improved, up to around 55mpg.

We expect the non-turbo 79bhp 1.0-litre petrol to remain the entry point of the range, offering cheap insurance and an affordable option to buyers who will largely drive around town. At the other end of the range, it’s not known whether the Volkswagen Polo GTI model will return.

See where the Polo lands on our list of best first cars.