Thanks to a large engine range, there’s a VW T-Roc to suit most buyers’ tastes and needs

As with the majority of Volkswagen models, there’s a T-Roc model for every potential buyer thanks to a wide range of VW T-Roc engines. The smaller petrols are likely to appeal to those with lower yearly mileages, while the larger diesels are more suited to higher-mileage, extra-urban use. Whichever you choose, a good balance of performance and economy is almost guaranteed thanks to the Volkswagen Group’s engine technology.

The T-Roc is a genuine pleasure to drive. Show it a fast, challenging corner and the steering eagerly responds to place the car on your chosen line, before the tyres grip strongly and the corner is dispatched with barely a trace of body lean. However, the MINI Countryman offers far more steering feel and generally involves you more in the process of driving – but even that car struggles to match the sharpest of superminis for driving fun.

As compact SUVs go, through, the T-Roc blends driveability and comfort very effectively, especially if you stick with the less aggressive 17-inch alloy wheels that come fitted to the SE models. Step up to the bigger, more eye-catching wheels and their lower-profile tyres do less to cushion passengers from shocks.

The cheapest and most fuel-efficient T-Roc petrol is the three-cylinder, 1.0-litre TSI, which produces 113bhp and returns an impressive high-40s MPG average. It gets from 0-62mph in a respectable 10.1 seconds, and makes a charismatic noise while doing so. Thanks to its responsive nature, it actually feels rather quicker than its acceleration figures suggest, and proves more than a match for the bigger-engined 1.5-litre MINI Countryman. Its six-speed gearbox is light, precise and easy to use, too. 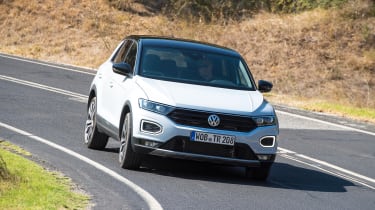 The 1.5-litre TSI EVO is the newest engine in the range and promises to be another highlight. Economy sits just below that of the 1.0-litre TSI, but there’s a useful boost in performance thanks to its 148bhp, cutting the 0-62mph time to 8.3 seconds.

The fastest petrol model in the range (besides the near-300bhp T-Roc R) is the 187bhp 2.0-litre TSI model. This is currently only available with four-wheel drive and a seven-speed dual-clutch gearbox, and while economy and emissions suffer as a result, the performance on offer is punchy, hitting 62mph in 7.2 seconds.

In this specification, the T-Roc gains adjustable drive modes that allow you to tailor the car to your needs with adjustments to the throttle, steering and suspension. Adjusted just so, the T-Roc 2.0-litre TSI can be fun behind the wheel. The balance between ride and handling is excellent and the car settles down nicely at a cruise.

Around town, the car’s great visibility, easily judged extremities and eager performance make it easier to drive than some of its less wieldy rivals. 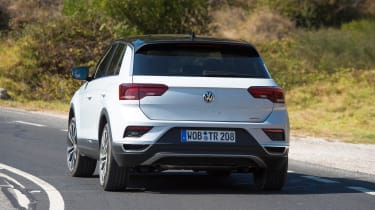 The 148bhp 2.0-litre diesel feels gutsy when you put your foot down, and doesn't seem as noisy as other diesels with this much power, even when you really wring it for all it can give. Front-wheel drive and a six-speed manual gearbox are standard, or you can opt for a seven-speed DSG automatic gearbox. The latter is very smooth between gears, but we did find it hangs on to third gear for an inordinate amount of time before changing up.