The Volkswagen T-Roc is a frugal SUV, as long as you avoid the 2.0-litre petrol

Volkswagen wants the T-Roc to appeal to a wide audience and as such you can choose from a broad range of petrol and diesel engines. The latter will mainly appeal to those who cover a high annual mileage, while the smallest petrols are just the job for those who make lots of short urban journeys – although they're capable of much more.

The entry-level 1.0-litre TSI could well turn out to be the best choice for those looking for low running costs from a petrol engine. It returns up to 47.9mpg, which is a good figure for such a small engine in a relatively large car. CO2 emissions of 133-142g/km mean it’s the lowest-emitting engine in the range, and the best choice for company-car drivers - although the option of a plug-in hybrid would be welcome as it would slash Benefit-in-Kind (BiK) tax. 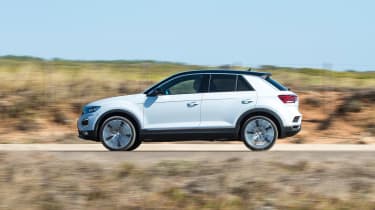 Volkswagen’s 1.5-litre 'TSI EVO' petrol engine is larger and more powerful, but it shouldn’t be much more costly to run. Official fuel economy is barely any worse at 44.8mpg, with emissions of 144-154g/km, partly due to the engine’s ability to run on half its cylinders when full power isnt required. Trim level specifications and the optional automatic gearbox can affect these figures though; the automatic offers up to 43.5mpg with CO2 emissions of 147-156g/km.

The top-spec petrol T-Roc only comes with 4MOTION four-wheel drive and a seven-speed dual-clutch automatic gearbox. As such, performance is the best of the three petrol models, but CO2 emissions are very high and fuel consumption drops to 34.4-40.9mpg and CO2 emissions of up to 188g/km. That’s barely better than the 32.5mpg and 199g/km you can expect from the much more powerful T-Roc R.

Top-end models can end up costing more than £40,000 if you tick enough boxes on the options list, in which case you’ll have to pay an additional £325 surcharge in years two to six of ownership, on top of the £150 yearly bill (after the CO2-weighted first year payment that’s rolled into the car’s price).

There are two diesel engines; a 113bhp 1.6-litre that can achieve up to 53.3mpg with emissions of 138-149g/km, and a 148bhp 2.0-litre unit that produces an impressively similar figures of 53.3mpg while emitting between 140-149g/km, although the optional automatic gearbox knocks a couple of MPG off. All-wheel drive is no longer offered on the 2.0-litre diesel.

The Volkswagen T-Roc stars in insurance group 11 for a 1.0-litre TSI petrol in S trim, increasing to group 16 for a 1.5-litre TSI SE. Unsurprisingly, the 2.0-litre petrol in SEL trim is most costly to insure, sitting in group 23 out of 50.