Large engines increase the Volkswagen Touareg's running costs, but a plug-in hybrid is on the cards

The Touareg has been on sale for several years with a fairly traditional diesel or petrol engine, despite rivals like the Volvo XC90, Range Rover Sport and BMW X5 coming with the option of plug-in hybrid technology. That’s not to say we’ll never see an alternative-fuel Touareg; a plug-in model should be arriving towards the end of 2020, with the ability to drive for around 27 miles on electricity alone.

In the meantime, a brace of 3.0-litre V6 diesel engines forms the backbone of the Touareg line-up, based on those found in the Audi Q7 and Porsche Cayenne. They make 228 and 282bhp respectively and both versions can return 34.4mpg while emitting up to 228g/km of CO2. This puts it firmly in the top 37% Benefit-in-Kind (BiK) band for company-car drivers, so Volkswagen will be hoping for more private buyers here. The largest diesel engine fitted to the Volvo XC90 is 50% smaller, managing 44mpg and emitting 154g/km of CO2. 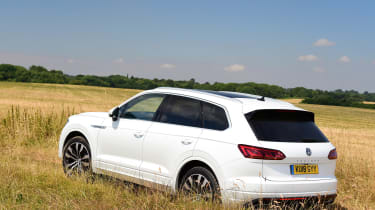 The petrol Touareg also uses a 3.0-litre six-cylinder engine, capable of up to 26.6mpg and emissions of 253g/km of CO2. For low-mileage drivers, this is likely to make only a small difference to overall running costs. When it arrives in the UK, the plug-in hybrid Touareg uses this engine paired with a 134bhp electric motor and 14.1kWh battery pack, resulting in CO2 emissions of around 44g/km. This will be largely down to its 27-mile EV range, and it will require topping up with a charger regularly to lower running costs.

The luxury SUV’s price, complexity and powerful engines mean it’s expensive to insure, with the entry-level diesel sitting in groups 38-40. With more power, this increases to 41-42 out of 50 groups, but this is still several groups lower than the outgoing version.

Volkswagen has offered a standard three-year/60,000-mile warranty with its new vehicles for many years, and while it’s fairly typical for the industry, rivals like BMW do slightly better with unlimited mileage in the first three years.

While full servicing details aren’t known yet, large and complicated SUVs have a reputation for being pricey to run. A fixed servicing plan with regular monthly payments is likely to be your best bet for avoiding stinging payments at the dealership come service time.