The Volkswagen Touareg is filled with chassis technology, but it feels rather numb

The Touareg is based on the same underpinnings as the Porsche Cayenne and Bentley Bentayga, but this is a more sensible animal that puts comfort ahead of cornering g-forces. We can understand why – previous versions of the Touareg have hardly been enthusiasts' favourites after all – but it’s a shame a bit more of the Porsche's appetite for spirited driving couldn’t have filtered through. Instead, the steering feels rather lifeless, even if you select a driving mode that makes it heavier.

Body lean is well contained, however, thanks to clever active anti-roll bars that keep the Touareg flatter through corners. Air suspension is also available, raising and lowering to improve the car's off-road ability and reduce drag on the motorway as needed. 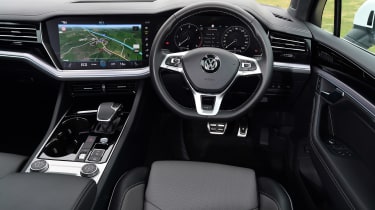 However, the Touareg's large wheels transmit some bumps you wouldn’t notice in a Volvo XC90, and at times it can become quite unsettled. It’s at its best on flowing roads and motorways, gliding along in the effortless style most customers want.

Another big step forward is the addition of ‘active all-wheel steering’ that turns the rear wheels a few degrees in the opposite direction to the front tyres in low-speed corners. You might not be able to see it working, but from behind the wheel it gives the Touareg a similar turning circle to a Volkswagen Golf, which helps in town centres or busy car parks. It comes as part of an optional package that includes the air suspension mentioned above, and – though pricey at over £2,000 – it's well worth considering. 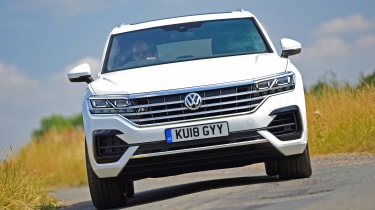 Six-cylinder engines are renowned for their smooth running and VW's 3.0-litre V6 is no exception. It’s quiet and feels plenty powerful enough if you need to pick up the pace. That’s especially the case in the 282bhp version (which does 0-62mph in 6.1 seconds), but the entry-level 228bhp engine is no slouch either. An automatic gearbox is fitted as standard, and it suits the nature of a large SUV, allowing you to waft along in Comfort mode, or speed up its response in Sport.

The eight-speed automatic gearbox can be a little slow to respond, though, and seems a little too keen to kick down a gear rather than make good use of the engine's plentiful pulling power.

While the vast majority of UK buyers tend to pick the diesel, the 3.0-litre TSI petrol shouldn't be overlooked. It's the fastest for a start, with 335bhp getting it from 0-62mph in a sporting 5.9 seconds - faster than most hot hatchbacks - and on to a possible top speed of 155mph. If you don't plan on big miles, the petrol Touareg could be the nicer choice.