All Volvo V40 models have a full complement of airbags, including a pedestrian airbag that pops out from under the bonnet

Volvo has a reputation for building safe and reliable cars, and the V40 is no exception. It has performed exceptionally well in Euro NCAP crash tests, while its barrage of safety equipment is very impressive, extending even to a pedestrian airbag.

The Volvo V40 was rated about average for reliability in our 2019 Driver Power owner satisfaction survey of cars currently on sale in the UK. Of the owners who responded, only 9.5% reported experiencing a problem with their car at least once. This is about half of the number that reported problems in our 2017 survey, suggesting Volvo has worked on making the V40 more dependable.

The car's exterior looks were praised by owners, as were – unsurprisingly – its safety systems. V40 buyers are less impressed by its running costs and its dated infotainment system, or its ride comfort and handling. In the manufacturer list, Volvo placed 13th out of 30 brands overall. 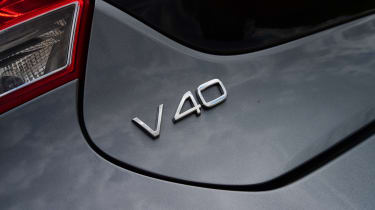 With a near-perfect 98% rating for adult occupation protection from Euro NCAP, the Volvo V40 is undeniably a safe car. Contributing to this strong performance is an automatic braking system called City Safe. This is fitted to every model and, when travelling at low speeds, applies the brakes if it detects an obstacle ahead to help avoid (or reduce the impact of) minor collisions. All V40s have a full complement of airbags, including a pedestrian airbag that pops out from under the bonnet to cover the windscreen and front pillars.