Seats are among the most comfortable in the class, making the Volvo V40 a good long-distance tourer, especially with a diesel engine

The Volvo V40's stylish looks continue inside, where it's light and airy and offers a welcome change from the cool efficiency of its German rivals. The dashboard is beginning to look a little dated, though, and the fit and finish – while still a cut above cars from the class below – isn't quite a match for the benchmark Audi A3.

The V40's seats are among the most comfortable in the class, making this car a great long-distance tourer, especially when fitted with one of the powerful yet frugal diesel engines. On our test we found that the slight harshness of the diesels under hard acceleration quickly subsided once cruising speed was attained, allowing the car to settle down and become remarkably relaxed on the motorway.

The suspension and bodywork are designed in such a way as to allow remarkably little noise into the car, and if the car is fitted with the smaller 16 or 17-inch alloy wheels the ride is very smooth, too. 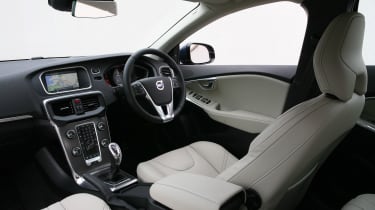 Volvo’s efforts at updating the V40 haven’t done much to change things inside the car. Although it all still looks interesting and imaginative, the ergonomic design of the dashboard has been left behind by newer rivals. The concentration of small buttons below the seven-inch screen on the centre console still looks good, but is a little confusing to use until you’re accustomed to it.

Audi and BMW do a better job of minimising or grouping the dashboard controls to create a cleaner look, even if their dashboards can look a little plain in comparison to the Volvo’s, which still feels distinctive and upmarket and is beautifully built from top-notch materials with surfaces that feel soft to the touch. One successful advancement in the V40 is its optional digital instrument cluster, which is easy to read and clearly presented.

The Volvo V40 is well equipped, even in entry-level Momentum trim. It comes with automatic wipers and LED headlights, cruise control, front and rear parking assistance, sat nav, climate control and DAB digital radio in addition to a comprehensive range of safety kit. 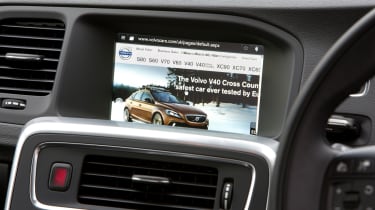 There are three trim levels in total, consisting of Momentum, sporty R-Design and luxury-focused Inscription. R-Design adds larger alloy wheels, leather sports seats, a body kit, a power-adjustable driver’s seat, tinted windows and an armrest, while Inscription adds much of the same but without the sporty style.

As is typical in this class, the Volvo V40 is available with a multitude of options, among them a raised boot floor. The panoramic sunroof is pricey, but floods the cabin with light. Volvo offers a range of option packs, which are cheaper than adding individual items one-by-one. They range from the heated seats and headlamp washers of the Winter Pack to the keyless entry, extra parking assistance and panoramic sunroof of the Xenium Pack.

As we've already mentioned, the interior of the V40 is beginning to show its age – not so much the technology available, more so the way it's integrated into the car and how you use it. There's no touchscreen or control wheel low down on the centre console. Instead, you use a knob on the centre console next to a sea of buttons, so it's not the most intuitive to use, but it's fine once you get accustomed to it.

However, the smallish seven-inch screen is clear enough and set well into the dash, so there are minimal reflections from bright sunlight. We think it could be a bit brighter and sharper, though, to keep up with its newer competitors. Earlier cars in a low spec come with a five-inch screen, and we think it’s well worth hunting out a car with the bigger screen if you can afford it.

You can't specify high-end Bowers & Wilkins stereos in the V40 like you can in more expensive Volvo models, but a Harman Kardon sound system is available in its place. It's decent enough, but at higher volumes it can make the interior panelling vibrate and become slightly buzzy.

The satellite-navigation system is pretty easy to use, too. There's just the right amount of voice guidance so you don't feel overwhelmed, while there's also a comprehensive point-of-interest search available. Once you've fiddled around using the controls, the menus are logical and easy to navigate. Instructions are clear, too, plus it's very quick to find a route. It calculated it in just two seconds when we tested it.

Volvo has a hard-earned reputation for safety and the V40 is no different. In fact, it scored one of the highest Euro NCAP results when it was tested, and its long list of safety and driving-assistance packages and systems are to thank for that. You can get the V40 with parking sensors all round, as well as a system that’ll parallel-park the car for you quite effectively.