The most impressive Volvo V40 engine for fuel consumption and CO2 emissions is the 1.6-litre D2 diesel

The Volvo V40 is more expensive than the Ford Focus and Vauxhall Astra, but loses value on the used market slightly faster than more prestigious rivals from Audi, BMW and Mercedes. Fortunately, its competitive fuel economy and CO2 emissions help close the gap in running costs.

The diesel engines are particularly impressive in this respect, but even the petrols perform well and should be considered if you cover low-to-average annual mileage. The V40’s three-year warranty and lengthy service intervals are competitive.

The cleanest and most fuel-efficient engine in the range is the 2.0-litre diesel D2 with a manual gearbox. It returns 56.5mpg fuel economy, making it attractive to high-mileage drivers and company-car users. However, due to the extra charge on diesel for business users, it’s not quite as appealing as it once was - the T2 petrol is actually in the lowest BiK band in the V40 range. The same D2 engine with an automatic gearbox returns 52.3mpg and 118g/km for a slightly lower BiK rate than the manual.

The 2.0-litre D3 diesel is, if anything, even more impressive, posting almost identical economy and emissions figures (and hence BiK ratings) while being almost two seconds quicker from 0-62mph.

The V40 petrol engines are less fuel-efficient than the diesels, with both T2 and T3 posting 42.8mpg and CO2 emissions of under 140g/km if chosen with a manual gearbox. The T3 does cost more to buy, however, because it’s more powerful and faster. When equipped with the automatic transmission the T2 and T3 models are marginally less efficient, dropping to 41.5mpg and 40.9mpg respectively. BiK bands are lower for the automatic models as they produce fewer CO2 emissions. 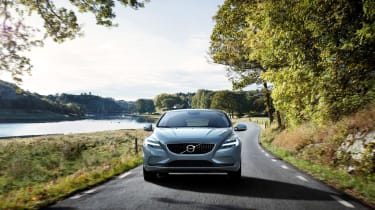 Volvo V40 insurance costs are competitive with other upmarket models, spanning group 17 (for the entry-level D2 Momentum) to 31 (for the top-of-the-range T5 R-Design Pro).

It may be worth asking Volvo for an insurance quote – using their own underwriting channels they may might be able to beat quotations from other suppliers.

The Volvo V40’s three-year/60,000-mile warranty is comparable to that from many other other marques. However, you only get one year of roadside assistance as standard. Additional years are provided free of charge when the car is serviced by a Volvo dealer.

The official service interval for the D2 is 12,500 miles, while all other models can go for 18,000 miles between services. These intervals vary according to how the car is driven. To help manage costs, Volvo offers two to five-year servicing plans.