The Volvo V40 can accommodate four adults in comfort, but the middle rear seat and boot are tight

The Volvo V40 is a roomy car that can accommodate four adults comfortably. Interior storage is good, helped by a large glovebox and door bins, while Volvo’s smart thinking extends to a drained ice-scraper recess in the driver’s door.

Volvo’s reputation for building spacious, practical cars takes a knock, however, when you see the V40’s boot space, at least with the rear seats upright. It's below average for the class, but it does at least offer the option of a raised floor for keeping valuables out of harm’s way.

The V40 is billed as a five-seat car, but in truth its rear seats are better suited to two, rather than three people. The outer seats are larger than in some other cars, meaning their occupants have more shoulder room and can see beyond the front seats more easily.

The glovebox and door bins are large and there’s even a cubbyhole behind the centre console, as well as cup-holders beneath the centre rear seat. On the downside, the middle rear seat is quite narrow. While the optional panoramic sunroof has some impact on rear headroom, as does the sloping roofline which can also compromise rear visibility – especially with the bulky rear headrests in their upright position.

If you’re likely to carry tall passengers in the rear on a regular basis you may find a Volkswagen Golf a more appropriate choice. 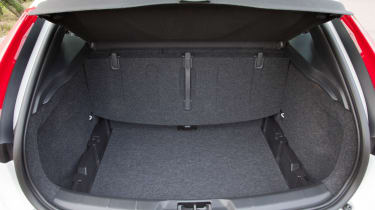 Surprisingly for a Volvo, the V40 isn’t the most capable load carrier in its class. It suffers from a disappointingly small boot which, at 324 litres, is markedly smaller than the 380-litre Volkswagen Golf and 365-litre Audi A3, while even the style-led Mercedes A-Class offers 370 litres.

Seats down, the V40’s load space increases to 1,032 litres, but it would be larger if they went down completely flat. Unusually, the front passenger seatback does this, allowing long loads to be carried.

The V40 has a maximum braked towing weight of 1,500kg, which means it could tow a modest-size caravan quite comfortably. With its impressive blend of power and economy, a V40 in D3 form would be especially suited to this task.