The Volvo V40, and in particular the D3 models, offer an excellent blend of performance and economy

With the exception of the sportiest versions, the Volvo V40 offers a good balance of nimble handling and a comfortable ride. It’s offered with a choice of petrol and diesel engines – the former slightly smoother and quieter, but less economical.

Although the V40 isn’t quite as sharp as a Ford Focus, enthusiastic drivers won’t be too dismayed by the way the car acquits itself on twisty roads. The chassis of the Momentum model we drove seems well designed to keep the body from leaning badly in corners, plus the ride copes well with imperfections in the road surface, giving it a far smoother feel than a BMW 1 Series. On the downside, the bigger wheels and stiffer suspension of the R-Design models make the drive a good deal bumpier.

The handling prowess of the V40 comes as no surprise when you learn it shares mechanical parts with the previous Ford Focus. However, although there’s lots of grip and very little body lean in corners and impressive precision in the steering, the feeling is more of safety and control than the slightly mischievous attitude of the BMW 1 Series.

There are two petrol engines and neither is exactly sluggish – even the entry-level 120bhp T2 reaches 62mph from rest in under 10 seconds. Next up is the 150bhp T3, which offers a strong blend of performance and refinement. It goes from 0-62mph in 8.4 seconds and on to a top speed of 130mph.

Note that if you choose an automatic gearbox with the T2 or T3, you get a turbocharged 1.5-litre engine, while the manual T2 and T3 models are both 2.0-litres – although these engines produce the same power and sit in the same road-tax band regardless of their size. The automatic models are a little faster though, with the T2 taking 9.2 seconds to reach 62mph. The T3 takes just 7.8 seconds. 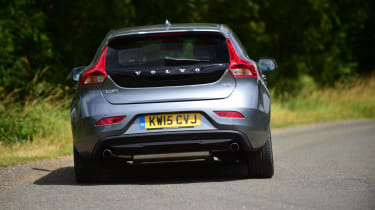 The V40’s diesel engines are the model’s main attraction. Although the D2 is the least powerful, it’s still our pick of the bunch. It produces 118bhp, which is more than sufficient for town driving and occasional motorway use. It provides a 0-62mph acceleration time of 9.9 seconds, beating the Audi A3 1.6-litre TDI diesel by half a second. If you really do need the extra performance, the 148bhp D3 can go from 0-62mph in 8.1 seconds.