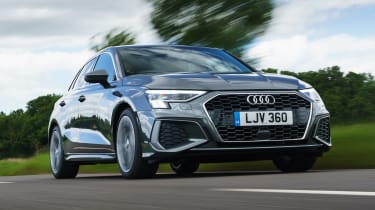 The Audi A3 has always been a smooth, assured car to drive, without necessarily offering the enjoyment of rivals like the BMW 1 Series. Based on an upgrade of the existing MQB platform, there's little about the latest A3 that tears up the rulebook here, and the A3 has similarly mature and slick manners as before.

Even the front-wheel-drive versions have plenty of grip, with an unflappable feel aided by multi-link rear suspension - a more expensive design than the torsion beam setup found in some cheaper cars, fitted in versions with 148bhp or more. Optional Progressive Steering needs smaller inputs at lower speeds and can be altered in different driving modes. It's a bit light and lacking in feel but switching into 'Dynamic' mode adds some weight. Buyers can also choose adaptive suspension, which works better than before, providing decent ride comfort. The standard suspension setup is also improved, so while adaptive suspension is a tempting feature, it isn't essential. 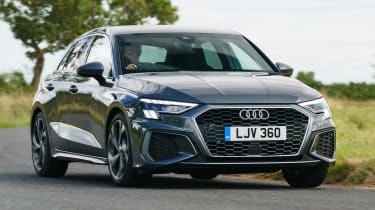 The entry-level petrol is a 1.0-litre three-cylinder turbo badged 30 TFSI with 109bhp. Despite its low output, it's eager to rev and gets the A3 from 0-62mph in 10.6 seconds. A surprising top speed of 127mph also means it shouldn't feel strained at the national speed limit. Just a six-speed manual gearbox is available, so the 30 TFSI is off the table if you want an automatic.

With 148bhp, the 1.5-litre engine in the A3 35 TFSI can get from 0-62mph in 8.4 seconds with a seven-speed S tronic automatic gearbox. That should be plenty fast enough for most families, and its 139mph top speed will make motorway cruising at 70mph nicely relaxed too.

It doesn't feel quite as nippy as you may expect but there's enough performance available to make it an acceptable all-rounder and our pick of the range. The six-speed manual gearbox has a light throw but can feel a bit jerky at low speeds. Luckily a high proportion of buyers are expected to opt for the automatic. 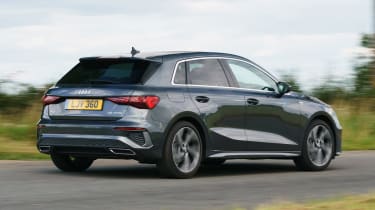 At launch there was just one 2.0-litre four-cylinder diesel engine badged 35 TDI, which is quieter than in the previous A3. It comes with front-wheel drive and the same automatic gearbox as the petrol at first, with four-wheel drive quattro also on the way for added traction. Power is identical at 148bhp, but extra torque makes the diesel feel punchier than the 35 TFSI in traffic and for overtaking.

This has now been joined by a 30 TDI version, which uses a 114bhp version of the same engine. Designed primarily with economy in mind, it still gets from 0-62mph in a reasonable 10.1 seconds. Like the entry-level petrol, it's also available with just one six-speed manual gearbox.