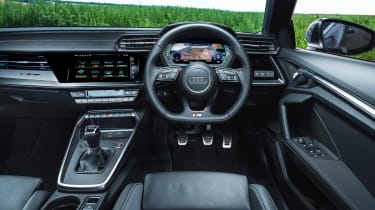 Along with its premium badge, the A3's main selling point has always been its upmarket interior. In fact, along with the BMW 1 Series, the A3 was one of the first cars to offer an executive class ownership experience in a smaller package; a trick countless hatchbacks and crossovers now try to pull off.

For its fourth outing, Audi has focused on technology, with a big step-up in processing power for its infotainment system to keep occupants connected, provide real-time navigation updates and media, while also improving safety.

There's a different feel to the driver's seat in the latest A3 because an angled dashboard, wide centre console and even the air vents on either side of the instruments, all lend it a focused, cockpit-like atmosphere. Soft-touch materials have been replaced with swathes of aluminium-style trim.

It goes without saying that it's far more modern than its dated predecessor, but retains that car's narrow, wing-like dashboard structure and minimal approach. The infotainment screen no longer sprouts from the dashboard, instead sitting adjacent to your hand on the steering wheel, while Audi's Virtual Cockpit digital instruments are also standard. Unlike the latest Volkswagen Golf with its touch-sensitive slider, many will be glad its climate controls are still physical buttons.

More reviews for A3 Sportback hatchback

An automatic gearbox with a small toggle-like gear selector means designers have been able to get more creative with their design, making space for a wireless charging smartphone pad below the centre console. There's also a small iPod-style controller for the stereo system but its functions are limited to changing the volume and skipping media tracks. 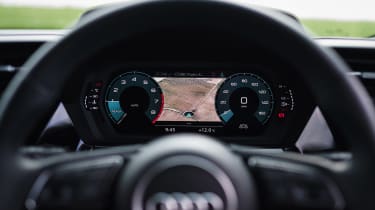 No less than five trim levels will be offered, called Technik, Sport, S line, Edition 1 and Vorsprung, with Technik and S line likely to be most popular. Technik is similar to the SE trim Audi has used previously, with 16-inch alloy wheels and cloth seats, but standard features like a 10.1-inch touchscreen with sat nav, a 10.25-inch Virtual Cockpit and LED headlights mean it's still well equipped.

Sport brings an aesthetic upgrade with larger wheels and a part-leather interior, along with a choice of driving modes, dual-zone climate control and folding door mirrors. S line alters the A3's looks again with 18-inch wheels, LED rear lights with sweeping indicators, privacy glass, sports seats and ambient interior lighting. It's a desirable makeover, that seems to strike a chord with UK buyers.

Edition 1 and Vorsprung both aim to give the A3 an even more premium feel, adding technology such as Matrix LED headlights, a Bang & Olufsen stereo, Virtual Cockpit Plus and even larger wheels.

Audi has long been prolific when it comes to options, even making it possible to personalise and upgrade its smallest A1 city car to feature almost every feature under the sun. That continues here, but some options like the Comfort and Sound Pack for Technik cars look sensible, adding parking sensors, heated front seats, a rear-view camera and Bang & Olufsen sound system for £1,200. It's also a good idea to include a space-saver spare wheel for £120, although charging £25 for a tool kit and jack is stingy.