The Audi RS6 Avant is arguably the most fitting flagship model for the brand, even considering the V10-engined R8 supercar. The German marque forged its reputation building classy, well-engineered executive cars, and the RS6 Avant's immense performance seems all the more impressive given its estate bodywork.

Lurking behind its honeycomb grille is a 4.0-litre twin-turbocharged V8 petrol engine producing 592bhp, which helps the car shrug off its two-tonne weight to get from 0-62mph in 3.6 seconds. Audi's famous quattro four-wheel drive and an eight-speed gearbox help here, leaving the driver to hold onto the RS6’s perforated steering wheel for dear life as it leaves sports cars trailing in its wake. You’d need an electric car such as the Porsche Taycan Cross Turismo to go much faster. 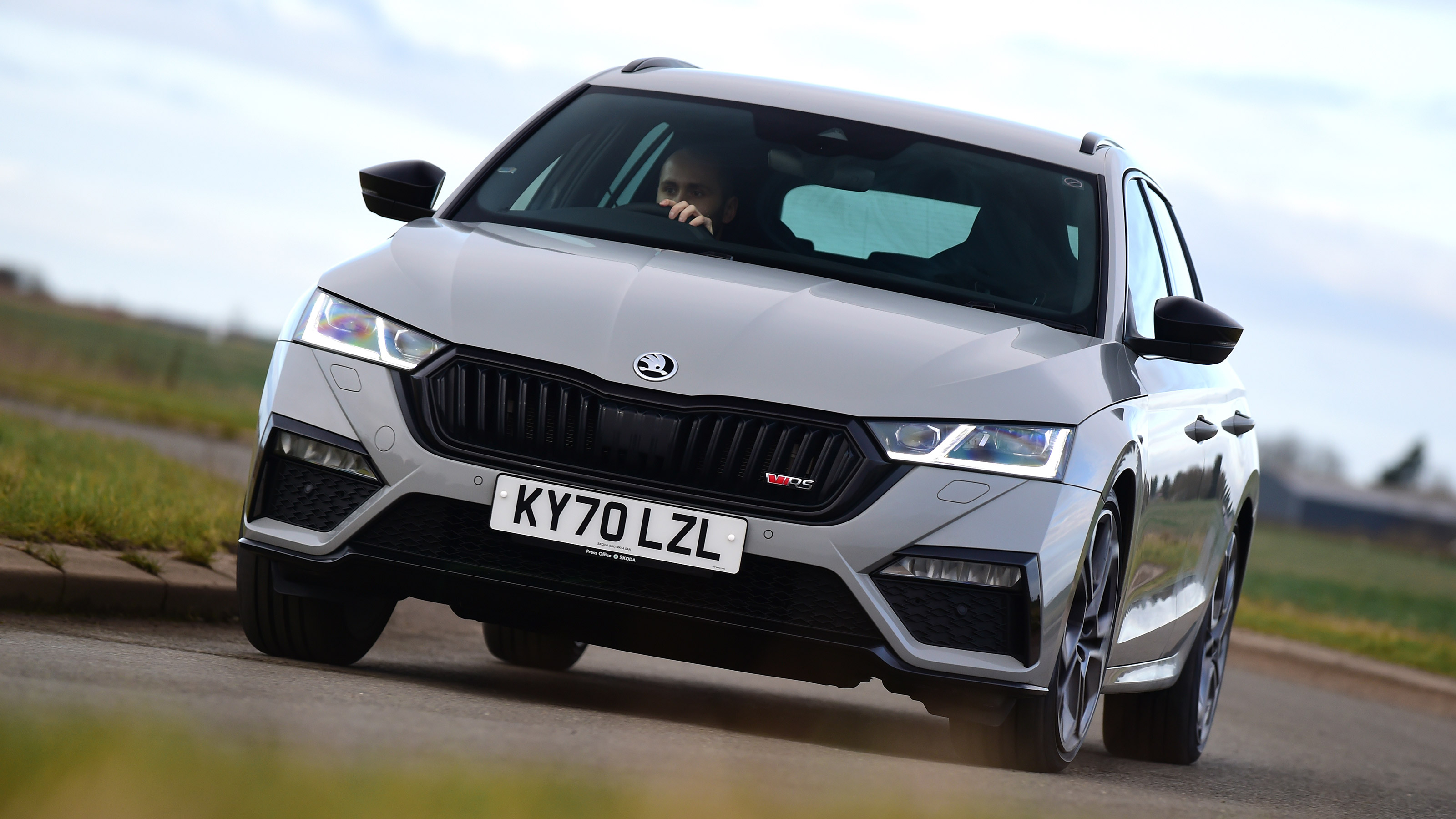 The handling is better than ever, with accurate steering and agility that's helped by an all-wheel-steering system. This can turn the rear wheels by a few degrees, quelling understeer and helping the RS6 feel almost as lithe as a rear-wheel drive car in some situations. When you want to calm things down, the Audi's V8 can also assume a more reserved, hushed personality, while the suspension does a reasonable job of soaking up bumps.

The interior is as you'd expect, based as it is on the well-built and tech-heavy Audi A6, but with more arresting bucket seats, a flat-bottomed steering wheel and silver gearshift pedals. There are also RS modes for the digital instruments and central display, showing everything from tyre pressures to temperatures and even g-force, rather like a more upmarket Nissan GT-R. There's lots of space too, including acres of legroom and a 586-litre boot that's only beaten by the Mercedes-AMG E63 estate.

Even packed with fuel-saving tech, the RS6 only just tops 20mpg

Let's get the figures out of the way first: the Audi RS6 returns up to 22.4mpg and emits 281-291g/km of CO2, placing it near enough in supercar territory for running costs. It clearly won't be a good choice for anyone after an affordable or green car, and remember that the claimed economy figure is a best-case estimate, but a few years ago a car with this much performance would return considerably worse economy figures. Audi has thrown a good deal of its fuel-saving tech at the big, powerful RS6, including a 48-volt mild-hybrid system and software that can shut down half the engine's cylinders under light loads. Coast at speeds between 34-99mph and the engine can switch off temporarily.

If you're after a more eco-conscious estate capable of harassing Ferraris, the Porsche Panamera Sport Turismo comes with a plug-in hybrid option that offers 31 miles of electric range and fuel economy of 113mpg. Or there’s the aforementioned electric Porsche Taycan.

Impressive agility for a car of its size

New, larger turbochargers mean the 4.0-litre V8 petrol engine now produces 592bhp, giving this family estate car almost as much power as a McLaren F1 supercar. The RS6 also weighs over two tonnes, but that doesn't stop it from getting from 0-62mph in 3.6 seconds. At full attack, the RS6 appears to pull the horizon towards it, with the numbers on the digital speedometer struggling to refresh fast enough. As standard it'll quickly get to its 155mph top speed, or you can pay extra to increase the speed limiter to 174mph with the standard steel brakes or 189mph if the optional carbon-ceramic stoppers are fitted.

There's now so much torque from low revs and such minimal turbo lag that the engine feels slightly less eager at high revs, with maximum power arriving at just 6,000rpm. Some engine noise trickery makes the soundtrack a bit more synthetic too but the optional £1,500 sports exhaust still sounds deep and menacing with bangs and crackles on the overrun.

Buyers will also need to decide how they want their RS6 to ride, because the standard suspension features air springs that are said to give the best ride comfort. Or the suspension can be swapped for Dynamic Ride Control (DRC), which uses coil springs and adaptive dampers for a more sporting drive. Here, the steering is ultra-precise and agility is incredible for such a large car, helped by all-wheel steering and a sport differential that can juggle torque between the rear wheels. After trying both systems, we found DRC was better able to cope with UK roads, providing taut body control but also doing a more accomplished job of absorbing bumps and compressions, improving ride quality. It’s standard on Vorsprung and optional elsewhere.

Audi’s quattro four-wheel drive system ensures there's traction to catapult the estate out of corners, but at times the RS6 almost feels like a rear-wheel-drive car. Carbon ceramic brakes cost a hefty £9,200, but they save 34kg in weight and showed no signs of losing their bite during our test drive. We suspect they’ll be unnecessary unless you’ll be using your two-tonne estate car on track days.

It might be a sports car killer, but the Audi RS6 Avant is also a big executive car, and even fitted with its sharp-edged body kit and 21 or 22-inch alloy wheels, it's still surprisingly refined on the move. In its most laid-back driving mode, the V8 is fairly hushed and the ride is more comfortable than in most hot hatchbacks.

The main change over the regular Audi A6 Avant is a set of figure-hugging bucket seats, upholstered in a mixture of leather and Alcantara, along with a set of aluminium gearshift paddles behind a flat-bottomed perforated leather steering wheel.

Given that the Audi RS6 is a six-figure car after only a couple of options, it’s not surprising that it features an awful lot of standard equipment. The kit list includes 21-inch alloy wheels, three screens for the driver to look at, Matrix LED headlights, a reversing camera and four-zone air conditioning. The RS6 Carbon Black is basically a styling pack with bigger wheels and carbon-fibre trim, while the range-topping Vorsprung gets additional kit such as the Dynamic Ride Control and a panoramic sunroof.

Supercar speed with room for all the family

If you need to carry lots of people or equipment, there are few faster ways to do it than the RS6 Avant - performance SUVs included. The sheer length of Audi's executive estate means tall passengers are particularly well catered for, with a highly adjustable driving position and plenty of legroom in every seat. It's comfortable too, with a wide armrest that folds down when the middle rear seat isn't in use.

The boot measures 586 litres, which should be easily big enough for most owners, but isn't quite on par with the huge 640 litres offered in the Mercedes-AMG E63 Estate. It is, however, comfortably larger than the 520-litre boot in the Panamera Sport Turismo and folding its 40:20:40 rear seats (which can be done using switches just inside the luggage compartment) extends its capacity to 1,680 litres. A powered tailgate also comes as standard and the RS6 is even available with a hidden trailer hitch and a camera-based system to make reversing with a trailer more straightforward.

The Audi RS6 Avant is unlikely to be cheap to maintain, but safety should be first rate

The Audi RS6 Avant is a large and complicated car, which could affect maintenance costs and reliability, but it's also loaded with Audi's latest safety technology.

Audi came a disappointing 23rd out of 29 manufacturers in our 2021 Driver Power survey, falling seven places since 2019. The brand’s top bosses won’t be pleased to see that it now sits behind every other premium brand, including BMW, Mercedes, Lexus and Jaguar, for owner satisfaction. A roughly average 15.8% of owners reported a fault in the first year of Audi ownership.

Safety experts Euro NCAP crash-tested the Audi A6 saloon on which the RS6 is based, awarding it the full five stars in 2018. Its strongest scores were in the Adult Occupant and Vulnerable Road Users categories, where it managed 93% and 81% respectively.

"The Audi RS6 blends jaw-dropping speed with estate car practicality, but it's not cheap to buy or to run, and it could be more fun to drive"
Lexus GS F blasts in with 467bhp
Lexus GS saloon

"Well built and comfortable, the four-wheel-drive Audi A6 allroad is a practical alternative to a full-sized 4x4"
Audi A6 Avant estate (2005-2011)
Audi RS6 Avant estate

"With its big boot and smooth ride, the A6 Avant is a great estate car that’s designed first and foremost to be comfortable." &nbsp;