The Audi Q2 drives more like a hatchback than an SUV 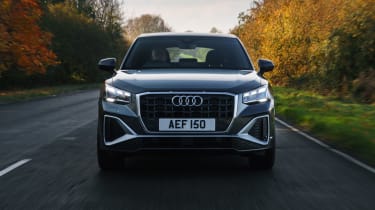 The Audi Q2 has a higher driving position than its hatchback sibling, the Audi A1, but not by much. That means the driving experience is more car-like than you might expect, so buyers after the imperious driving position of a true SUV may want to consider a more mainstream brand or spending the extra Audi asks for the larger Q3.

The trade-off for this is that the Q2 drives much like a normal hatchback. That means there’s little body lean when cornering and the steering responds quickly and accurately to your inputs, albeit with precious little feel or feedback. If you want to tinker with the way the Q2 drives, Audi’s Drive Select system (standard from Sport trim) allows you to change how sensitive the steering, and gearbox are, as well as how firm the suspension is, depending on whether you feel like a sporty or comfortable driving experience. The Q2 feels generally sharper than its Volkswagen T-Roc rival from behind the wheel, and is more enjoyable to drive then either the Peugeot 2008 or Renault Captur. But this sporty nature comes at the expense of a slightly firmer, less comfortable ride. It’s easy to manoeuvre around town, yet – despite its diminutive size – can more than hold its own in motorway traffic.

The six-speed manual gearbox is decent enough, but the excellent S tronic automatic suits the Q2 well, changing gear with little fuss. Audi’s quattro four-wheel-drive system, meanwhile, is available with the 2.0-litre diesel engine. Four-wheel drive is worth considering if you think you’ll need extra grip but it makes the Q2 more expensive, and the extra weight and mechanical complexity it brings causes a slight drop in economy.

The 1.5-litre 35 TFSI petrol engine is pleasingly punchy, taking the Q2 from 0-62mph in 8.6 seconds. It makes an enjoyable noise, too, while gelling well with the seven-speed S tronic dual-clutch automatic gearbox, which shifts smoothly and instantly. You can shift manually using the steering-wheel-mounted paddles, although we enjoy the hands-on involvement of the regular six-speed manual more.

The entry-level 114bhp turbocharged 1.0-litre 30 TFSI petrol, despite its apparent paucity of power, has impressed us in other cars, particularly with the surprising punch it packs when overtaking. This means you never have to work it particularly hard to keep up with traffic, or match its official 0-62mph time of around 11 seconds. 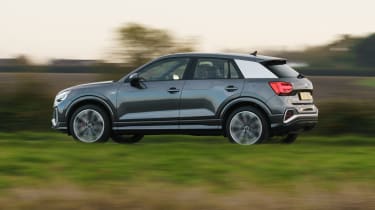 It's equally comfortable on the motorway as it is in town, too, with plenty of oomph to keep up with traffic as well as a quiet, refined and relaxed demeanour. Audi’s sharp-shifting six-speed manual gearbox is standard fit with this engine, to which it feels perfectly suited.

While it hasn't yet been confirmed for the facelifted Q2, a 2.0-litre engine (badged 40 TFSI) has topped the petrol range although, with four-wheel drive as standard, it has been more expensive to buy and run. For a properly rapid small SUV, the Audi SQ2 features the same engine with 296bhp. With four-wheel-drive and an automatic gearbox, it'll scorch from 0-62mph in just 4.8 seconds.

If you cover more miles than most, the Q2 may still make more financial sense with a diesel engine. We don't expect it to be as smooth as the petrol line-up but it should have an enjoyably lazy power delivery that can make motorway driving more relaxing.

The Q2 diesel choices were previously a 1.6-litre 30 TDI engine that produces 114bhp, or a 2.0-litre 35 TDI with 148bhp, but the smaller engine has been discontinued with the facelift. The 2.0-litre TDI engine is well-proven and found in other VW Group cars, including in the Volkswagen Golf.