Enthusiastic drivers won't be grinning but the Audi Q3 is fast, safe and comfortable

The Audi Q3 is a mature, grown-up-looking SUV inside and out, and the same is true of the driving experience it offers. Those trading up from a Nissan Qashqai or Renault Kadjar will welcome its sense of sophistication, but drivers upgrading from a Ford Kuga and Peugeot 3008 may well wish that the Q3 was a little more fun from behind the wheel.

Indeed, the Audi can't match its BMW X1 rival where excitement and responsiveness are concerned, but the general feeling is one of competence, safety and comfort, with more than enough grip to attack challenging roads determinedly should the mood take you. The Q3's wide tyres hold onto the road keenly and bite strongly when you turn into a bend, and there's little of the body lean that can plague some SUVs. Yet the latest Q3 doesn't punish passengers with an uncomfortable ride when the driver is having fun. 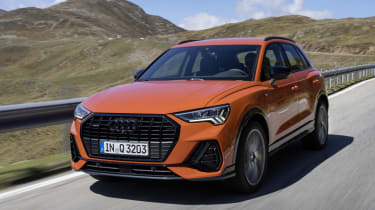 Audi must have keenly felt criticisms of the previous model's unyielding ride, because the latest Q3 is a car transformed. Even the S line trim level, with its large alloy wheels, low-profile tyres and stiffer sports suspension, remains smooth on motorways and – while urban potholes will occasionally send a shudder through the car – low-speed driving is generally very comfortable. Choose the optional adaptive dampers for added smoothness in 'normal' mode and a more focused feel when driving more enthusiastically.

Perhaps the biggest fly in the Q3's ointment is the way it changes gears. We find the six-speed manual a little clunky, which can frustrate efforts to make quick gearchanges. Meanwhile, the seven-speed S tronic dual-clutch automatic can occasionally pause before obeying the instruction to change gear.

Audi's latest engine nomenclature takes some understanding. The 35 TFSI, a 148bhp 1.5-litre turbo, sits at the bottom of the range, with front-wheel-drive and the six-speed manual gearbox. Audi claims it manages 0-62mph in 9.3 seconds. A quattro four-wheel-drive version will be offered soon, plus a seven-speed S Tronic gearbox is available with a 9.2-second 0-62mph time claimed.

The 40 TFSI and 45 TFSI are 187 and 227bhp versions of a 2.0-litre turbocharged petrol engine. They cover 0-62mph in 7.4 and 6.3 seconds respectively and both have quattro four-wheel drive and the S tronic automatic gearbox as standard. While the latter is markedly faster when pushed to its limits, the 187bhp version has more than enough power to satisfy most drivers.