Can the BMW 1 Series be the model to turn around poor owner satisfaction?

Despite an enviable reputation for engineering and the fact it makes some of the most desirable cars, BMW came a lowly 27th out of 30 manufacturers overall in our 2020 Driver Power survey, well behind Audi (21st), Jaguar (12th) and Lexus in top spot. Safety is much more impressive, though, and BMW's typically score top marks in crash tests. 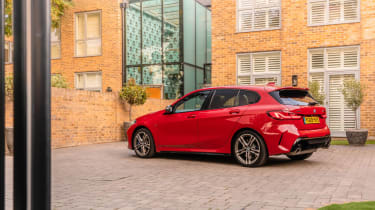 As mentioned above, BMW has lots to do when it comes to impressing customers. According to our 2020 Driver Power satisfaction survey, you loved its engines and interior build quality, but were less positive about running costs including servicing bills and steep insurance. A higher-than-average 20.4% of you reported a fault within the first year of ownership. Hopefully the all-new underpinnings of the 1 Series will usher in a new era for reliability, but only time will tell.

The 1 Series was awarded the maximum five-star safety rating by Euro NCAP in 2019. It performed well in the adult and child occupant protection categories, as well as for pedestrian safety and active safety features. For comparison, the very high-scoring Mazda3 scored 98% for adult protection, versus 83% for the 1 Series, and 81% rating for vulnerable road users, compared with 76% for the 1 Series.

There are some new features, including a head-up display that can keep your eyes on the road ahead more of the time. Auto emergency braking is standard, with the ability to spot pedestrians and vehicles, along with lane-departure warnings. Optional systems include rear collision and cross-traffic warnings and lane-keeping assistance.