Short of buying a hybrid, the BMW 1 Series engines are some of the most advanced and economical offered in the family hatchback class, featuring the latest turbocharging technology.

Despite the downturn in diesel sales, BMW still reckons most customers will opt for a diesel in the 1 Series, at least for a few years. Three are offered, badged 116d, 118d and 120d as we've become familiar with. Pick a 116d and you'll be getting a 1.5-litre three-cylinder that's shared with the MINI range. It's thrifty, managing up to 62.8mpg and CO2 emissions of just 119g/km with a manual gearbox and smaller alloy wheels fitted.

With 138bhp, the BMW 118i is the only petrol in the regular 1 Series range so far. It can return up to 47.1mpg and emits 140g/km, making it an affordable option for company-car drivers with a mid-range BiK benefit banding. During our time with the car, however, we were only able to achieve around 34mpg on average, with a figure in the high thirties possible on longer drives.

A rival to the Volkswagen Golf R and Mercedes-AMG A35, the M135i xDrive returns up to 36.2mpg and emits 182g/km of CO2, making it by far the most expensive 1 Series to run. 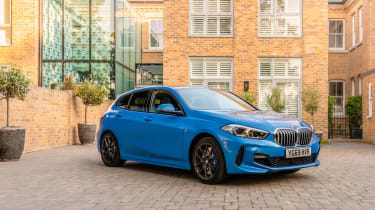 Insurance groups haven't been announced for the latest BMW 1 Series yet, but we'd expect them to be fairly similar to its main rival - the Mercedes A-Class hatchback. The Mercedes starts in group 17 for the A180d and spans up to 37 for the rapid A35 AMG.

Every BMW comes with a three-year, unlimited mileage warranty that also includes roadside assistance. It equals the deal offered by Mercedes and can be increased in length for an additional cost.

Sensors in the car keep watch over the oil quality and alert you when it deems a service is required, usually between one or two years and less than 20,000 miles apart. Customers can also opt for a BMW service plan, paying a monthly sum to cover routine maintenance instead of being stung by unexpected bills.