Despite the switch away from rear-wheel drive, the BMW 1 Series is sharp and mature to drive

As you'll no doubt have already heard or read, the really big third-generation 1 Series news is the move from BMW's traditional rear-wheel drive layout to the same front-wheel drive setup as every rival, from the Focus to the Golf and A-Class. It shouldn't be at a disadvantage then, but the 1 Series loses one unique selling point that kept many driving enthusiasts hooked.

The good news for them, is that the latest 1 Series is just as good to drive - and possibly even better - than it was before. Most drivers will never even notice it's front-wheel drive, because on the move it feels completely balanced, with no sense the front or back wheels are having to bear the brunt of any mechanical forces acting on them. It still feels like a BMW too, thanks to its meaty steering, punchy engines and slick eight-speed automatic gearbox (a manual is also offered).

It's no exaggeration to say the 1 Series feels a lot like the latest BMW 3 Series saloon to drive, with a superb ride and refinement as well as strong brakes and neat handling. With four-wheel drive, 302bhp and upgraded suspension and brakes, the BMW M135i is a true hot hatch that goes into direct competition with the Volkswagen Golf R and Mercedes-AMG A35. 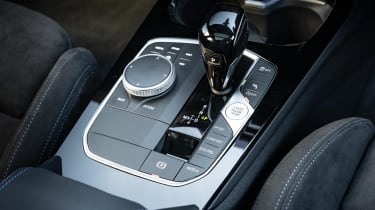 Shared with MINI models, a three-cylinder 1.5-litre diesel features in the entry-level 116d with 114bhp. It might be economical, but it can also get from 0-62mph in a reasonable 10.1 seconds.

The 2.0-litre 118d with 148bhp is expected to be the top-seller, with a new design of turbocharger which makes its ample torque available from low down in the rev range at only 1,700rpm. The 1 Series has shed a few pounds too, and it all adds up to strong performance, with 0-62mph taking just 8.4 seconds and a top speed of 134mph. Based on the same engine, the 120d is tuned to make 187bhp and gets four-wheel drive and an automatic gearbox as standard, reducing its acceleration dash to seven seconds exactly.

Like the entry-level diesel, the petrol 118i is also a 1.5-litre three-cylinder that's familiar to owners of MINI Cooper models, with 138bhp and enough punch to get the 1 Series from rest to 62mph in 8.5 seconds.

While its performance figures aren’t outstanding, the 118i engine is quiet and refined to drive around town, with its signature three-cylinder thrum only occasionally noticeable. On faster roads, it's a decent performer too, with ample power that’s delivered smoothly.

Our test car was specced in M Sport trim, including larger, 19-inch alloy wheels. Overall refinement on the move is excellent, with a comfortable ride that’s only occasionally disturbed by the combination of poor surfaces and the big wheels.

On twisting roads is where the 118i really shines, as despite its relatively modest power output, it’s huge fun to drive. The driving position is excellent, with the wraparound dashboard and chunky steering wheel giving it a cockpit feel. In faster corners, the car remains balanced and composed, with sharp steering and little detectable body lean when turning in. The six-speed manual gearbox is quick and precise, adding to the experience on faster roads.

At the opposite end of the spectrum sits the M135i, which gets so much bespoke kit, it's almost its own model. Most notably, a 2.0-litre turbocharged petrol engine sits between the front wheels and produces a substantial 302bhp - although this is slightly less than its rivals. Instead of rear-wheel drive, the hot hatch is now four-wheel drive, giving it a 0-62mph time of just 4.8 seconds.

While not confirmed yet, it's possible the 1.5-litre petrol engine could be combined with an electric motor and battery pack, creating a plug-in hybrid model with similar specifications to the MINI Countryman Cooper S E ALL4 Hybrid.