Fuel-efficiency is good for an SUV of this type, but the plug-in hybrid model is the most fuel efficient 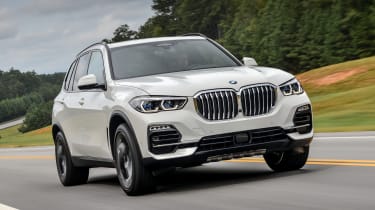 Across the X5 line-up, only the plug-in hybrid and entry-level 30d diesel engine can better 40mpg, which is somewhat disappointing. However, view its fuel-efficiency figures against the vast performance on offer, and the picture doesn't look so bad. BMW has also been able to find some efficiency improvements over the previous X5, despite the new model being longer, wider and taller. 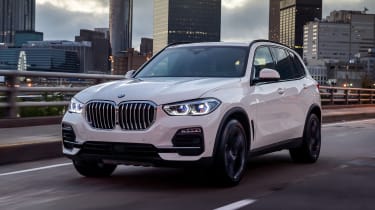 After the plug-in hybrid model, the cheapest conventionally powered X5 to run is the xDrive30d, with a 3.0-litre diesel, which features mild-hybrid assistance and is capable of returning up to 42.2mpg. Its CO2 emissions of 175-197g/km, however, place it in the higher Benefit-in-Kind (BiK) band for company-car drivers. The Mercedes GLE 250d returns a similar mpg figure, but it's also quite a bit slower.

The mid-range xDrive40d also features mild-hybrid assistance and offers improved performance over the entry-level 30d model, with only a slight hit on fuel economy. It can officially manage up to 34.9-39.2mpg with CO2 emission of 188-211g/km depending on specification. The range topping M50d is the fastest diesel, while also edging out the petrol for economy. Its official figures are 32.8 to 34mpg with emissions of 217-226g/km, so needless to say it's firmly in the most expensive BiK band for fleet drivers.

There are two conventional petrol models: the xDrive40i, which in M Sport trim returns 25.9-28.2mpg with emissions of 227-248g/km, and the xDrive40i xLine model, which returns 27.7mpg and emissions of 231-249g/km, making both versions as expensive to run as a sports car.

The M50i is essentially a standalone model, featuring a thirsty twin-turbocharged V8 engine. Given that it’s the second most powerful engine offered in an X5, it's fuel economy numbers are fairly respectable: 23.3mpg and emissions of 276-283g/km.

The flagship BMW X5 M is more on a par with a supercar, returning 22.1mpg if driven carefully, with CO2 emissions of 291g/km roughly three times that of a supermini.

If you'd rather own an X5 with a petrol engine, it's probably worth opting for the xDrive45e plug-in hybrid, which can cover 54 miles on electric power, a distance that should cover most daily commutes. It also has the lowest emissions of the X5 range, too, claiming an official CO2 emissions figure of 27-31g/km.

Every conventional petrol and diesel BMW X5 costs £150 a year to tax, with the plug-in hybrid costing £140. Because the list price of every model exceeds £40,000, a surcharge of £325 is also payable in years two to six.

The BMW X5's price, performance and advanced technology means it sits at the top end of the one to 50 scale. As a guide, the Mercedes GLE sits in groups 35 to 50. Even the X5 xDrive30d xLine is in group 45, while the BMW X5 M is in group 50.

BMW offers a similar warranty to rivals, covering the X5 for the first three years. It's slightly more generous that you'll get with a Volkswagen Touareg or Audi Q7, though, because BMW doesn't cap mileage during this period.

All BMW models are offered with the choice of fixed-price servicing plans that can be paid up front when you purchase the car, or spread over monthly instalments to make maintenance costs more manageable.