"The van-based Fiat Doblo is ideal for families on a budget, as it offers maximum space for minimal outlay"

Those seeking space and practicality at an affordable price should be drawn to the Fiat Doblo. It’s based on the Doblo van, so its boxy lines mean there's heaps of space inside. Entry-level versions offer more space for your money than nearly anything else on sale, while the optional upgrade to seven seats doesn’t cut cabin space too severely, while turning the Doblo into a roomy people carrier. The Doblo range uses the same engines and gearboxes as the Punto supermini, so the Doblo is easy to drive, while diesels return excellent fuel economy.

Economy and emissions are impressive across the Doblo engine line-up and competitive for the class. The 1.4-litre petrol returns 39mpg and emits 165g/km. The most powerful 1.6-litre diesel is the highlight of the range, promising 51.4mpg and 144g/km. Every Doblo costs £140 in annual road tax.

The engine line-up includes a 95bhp 1.4-litre petrol, and 105bhp and 118bhp 1.6-litre Multijet diesels. The latter feel quick, even though they only claim 0-62mph in 11.3 and 13.4 seconds respectively. The larger diesel is well suited to motorway use, but all engines have to be worked hard and are noisy on start-up, as well as when the revs climb above 2,500rpm. Despite the Doblo’s van roots, it corners well. The steering is precise, handling is sharp, grip is good and body roll less pronounced than in the previous car. A huge front windscreen ensures there’s excellent visibility.

Smooth ride and with plenty of room to stretch your legs

Soft springs mean the Doblo soaks up bumps in the road easily, while the cabin doesn’t suffer from wind noise on the motorway. There’s plenty of head and legroom inside, even if you upgrade to seven seats, and the seats themselves are soft and comfortable. It sounds like a perfect combination but overall the Doblo is simply getting on a bit now and is outclassed by its rivals that feel much more mordern.

It’s hard to top the Doblo for practicality. The boot boasts a strong 790-litre capacity; remove the seats and that rises to an enormous 3,200 litres. The sturdy parcel shelf is capable of supporting up to 70kg, while sliding rear doors make access easy. Fiat offers a Family Pack option that adds two more seats to turn the Doblo into one of the cheapest seven-seaters on the market.

Fiat cars haven’t always had the strongest record for reliability, and the brand actually finished in last place for overall owner satisfaction in our 2016 Driver Power survey. The Italian company was the worst placed out of 32 brands covered, with owners particularly disappointed by the comfort and ride quality of their cars. Quality wasn’t rated highly and owners weren’t impressed by reliability, either.

On the plus side, for running costs the brand was ranked in a strong 11th place. These ratings are based on the overall results from all Fiat owners who took part in the survey – we should stress that too few Doblo owners responded for the model to have been individually assessed.

It’s less easy to be positive when it comes to the Doblo’s safety, though. When it was tested by independent crash safety experts Euro NCAP, it received a rather mediocre three-star rating. Protection for adult occupants was rated at 75%, while children would likely fare worse, with their protection rated at 46%. The way the Doblo’s seatbelts and airbags protected the car’s occupants in a crash came in for some criticism in the organisation’s report and it was noted that no autonomous emergency braking system is available.

Prices for the Doblo are in supermini territory. It undercuts its Skoda Roomster and Citroen Berlingo rivals, so you get a lot of car for your cash. But the entry Doblo doesn’t get air-conditioning or electric rear windows. The top-of-the-range Eleganza is better equipped. All in all, you’ll struggle to find a cheaper seven-seater, but it just doesn't feel like a good enough product for the cost compred to rivals like the Ford B-MAX. 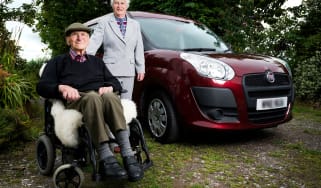 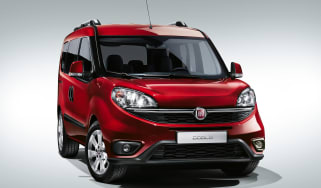