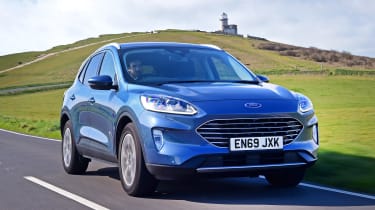 It’s safe to say that previous Kugas have been a mixed bag in the dynamics department. The first-generation car was more engaging than almost all of its rivals, but Ford tried to make the next one appeal to a wider audience, and it lost some of its handling prowess as a result. We’re happy to report that the latest car is a return to form; it’s more agile than you might expect and doesn’t roll too much if you take a corner quickly.

The downside of that is a slightly firm ride. You’ll notice the imperfections in the road more than you would in a Volkswagen Tiguan, but we didn’t find it uncomfortable and most bumps were absorbed without any fuss. The car can start to feel fidgety at higher speeds but that’s mainly noticeable on rougher surfaces. 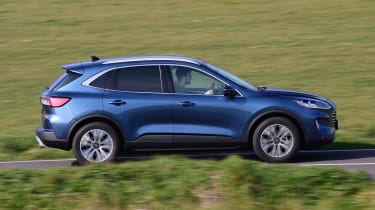 We found the steering light but it still has a lot more feel than plenty of other SUVs. The manual gearbox, standard in all but the 187bhp diesel and the plug-in hybrid, is precise and great to use.

The two 1.5-litre petrol engines have been carried over from the old Kuga, but the entry-level 118bhp engine (only offered on Zetec models) is now almost a second quicker from 0-62mph. It still takes 11.6 seconds to hit that threshold, though, and we’d recommend going for the 148bhp version instead. It’s both more economical and quicker, hitting 0-62mph in a much more reasonable 9.7 seconds. At launch, both these engines come with a six-speed manual gearbox and front-wheel drive.

Also carried over from the old car is a 1.5-litre diesel engine, and at the moment it’s the only engine with a choice of manual or automatic gearboxes. Its 118bhp doesn’t feel quite enough to power such a big car, and 0-62mph takes 11.7 seconds for the manual or 12 seconds for the automatic. It’s around a second quicker than the same engine in the Mk2 Kuga, but still a bit pedestrian. 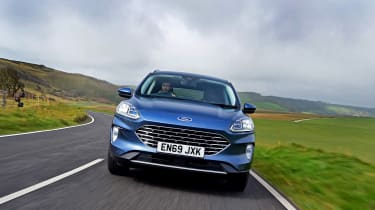 The diesel sweet spot is the 148bhp 2.0-litre engine, which now comes with mild-hybrid technology - improving fuel efficiency and giving the engine welcome extra grunt. It’s the most efficient diesel and its 9.6-second 0-62mph should be sufficient for the majority of buyers. Above that, there’s a 187bhp 2.0-litre engine without the mild-hybrid assistance, which reduces the acceleration time to 8.7 seconds. At present, this only comes with four-wheel drive and an automatic gearbox.

Sitting at the top of the engine range is a brand-new plug-in hybrid model, consisting of a 2.5-litre petrol engine, an electric motor and a battery. Surprisingly, this isn’t the fastest version in the range, but 0-62mph is dealt with in a reasonable 9.2 seconds. We’re yet to drive the plug-in hybrid so we can’t tell you about how the powertrain feels, but it has a CVT gearbox like the Ford Mondeo Hybrid. In the Mondeo, the gearbox can strangle the engine and be horribly noisy when you accelerate hard, so we’ll hope this isn’t the case in the Kuga.