"The Infiniti QX30 is a&nbsp;taller and more rugged-looking version of the standard Q30 luxury hatchback"

The Infiniti QX30 is a more rugged version of the Infiniti Q30, which we've reviewed separately. With the SUV market being so fiercely competitive, it has a hard task to persuade customers away from the Mercedes GLA, Audi Q1 and BMW X1 – cars from brand names whose appeal speaks for itself. 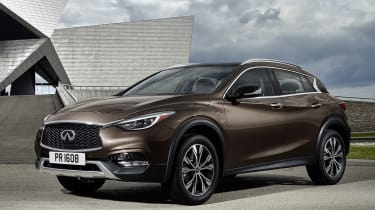 Unlike these three, the QX30 isn’t quite an SUV in the traditional sense. Along with the DS 4 Crossback and Volvo V40 Cross Country, it combines the visual appeal of a tough all-terrain vehicle with the road manners of a normal hatchback. Cars like these have their own individual style and way of doing things and this is very much a selling point of the QX30.

Being heavily based on the Q30 hatchback, it stands a little lower than some of the competition, but still exudes a muscular appeal, with curves that you either love or hate, and a very distinctive front grille. It certainly is eye-catching and that counts for a lot.

There's only one engine available for QX30 buyers: a 2.2-litre diesel. With 168bhp, it has plenty of power and allows economy of 57.6mpg; considering that the QX30 comes only as a seven-speed automatic and is weighed down by a four-wheel-drive system, that’s not a terrible figure.

Less good news is the QX30's rather steep price: spec for spec around £2,000 more than the equivalent Q30. Only two models are offered: Luxe and Luxe Tech. A full leather interior, sat nav and dual-zone climate-control are standard on both, while the latter has a rear-view camera and automatic parking system as well. This means it meets the Mercedes GLA head-on in terms of price, yet doesn't quite feel like the mini-SUV the German car is. 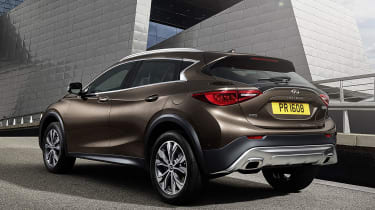 Fortunately, the QX30 appeals a lot more once you’re behind the wheel than it does on paper. It offers quite an entertaining drive and tempts you into having fun – not something you always experience in cars like this. It doesn’t punish its passengers for its driver’s exuberance, either. Journeys are made in considerable comfort on most road surfaces thanks to supple suspension.

For all its strengths, the QX30 can’t quite claim the top spot in this crowded part of the market. It's a well built, well equipped and fine-driving machine, but doesn’t have enough all-round talent to trouble its BMW and Mercedes rivals. It's in the same ballpark, though, and if it was priced a little lower. it would ruffle a lot feathers. But for those who want to stand out from the crowd, it makes a refreshing alternative choice.

It was a safe assumption for Infiniti that customers would be looking for decent economy when buying this kind of car, and perhaps because of this a diesel engine is your only choice. It’s a 168bhp four-cylinder, turbocharged engine that drives through a seven-speed dual-clutch automatic gearbox. Four-wheel drive is also fitted as standard.

The outcome of this is a fuel-consumption figure of 57.6mpg, allied to a CO2 emissions rating of 128g/km. This puts it on an even keel with similarly equipped rivals. For company-car choosers, Benefit in Kind (BiK) is rated at 25% for the top-of-the-range Luxe Tech model.

You’ll need to schedule a service for you QX30 once every year, or at 15,500 miles, whichever comes first. And although there are currently a limited number of Infiniti dealerships, they do offer to collect your car and redeliver it after service, so you shouldn’t be too inconvenienced.

Meanwhile, insurance is rated in group 23E. By way of comparison, the equivalent Audi Q3 is in group 24 and a diesel BMW X1 begins in group 25.

A reasonably fun car to handle, but saddled with an uninspiring engine

Putting the Q30 on stilts has had a positive effect on the way it drives. While we're uninspired by its road manners compared to those of its rivals, the QX30 feels rather engaging and responds well to being hustled along energetically.

Despite its increased height, it resists body lean well and there's plenty of grip from the those chunky wheels and tyres – and, of course, that four-wheel-drive system. Compared to a Mercedes GLA, we found it's a more pleasurable car to drive.

Arguably the engine is the weakest aspect of its performance. The 2.2-litre 168bhp diesel doesn’t feels or sound as smooth as you might expect. It sounds a little industrial at idle and isn’t especially rewarding when revs are increased. Unlike a good petrols which often respond well to being worked hard, this diesel engine is best seen as a source of motivation and nothing more.

It works well with the standard seven-speed automatic gearbox, which is set up to make the most of the engine’s low-down pulling power. Making good progress is a fuss-free affair – just not a very exciting one.

The quoted performance figures are quite impressive, with 0-62mph being covered in 8.5 seconds, which helps to reassure that you’ll never feel the car is short on power when you need it.

A high ride height brings a smooth ride, but passengers rather lack space

The Infiniti has a sweeping, contoured exterior that looks nothing like anything else on the road. It’s rather a shame, then, that this degree of creativity doesn’t seem to have been embraced by the team who designed the interior. By comparison, it’s a little safe and lacking in character.

It is lifted in part, though, by some high-quality switchgear it has in common with the Mercedes GLA. Electric window controls, the major controls for the infotainment system and some other minor switchgear are all shared with the German car. In all it feels solid and has a fairly luxurious look to it, although we wish it was a bit more interesting.

The seats are very comfortable and are heated in front, with a good range of adjustment and plenty of support. Passengers will also find that the extra height over the Q30 has brought with it an improvement in ride quality, a side-effect of a higher degree of movement in the suspension. This means that larger road imperfections are well cushioned and the car flows over bumpy roads with panache – until it hits a pothole, at which point the large, sporty wheels and low-profile tyres announce themselves with a thud.

The greater height also improves the view out, which does a little to relieve the claustrophobia that could set in among taller occupants of the rear seats. Headroom is a little restricted back there, due to the swoopy exterior styling, plus the windows are small and don’t allow a great deal of daylight in. Be wary of choosing dark interior colours if you value the comfort of rear-seat passengers.

Extra features to make long journeys more agreeable include a standard noise-cancellation system. It’s the same technology found in a pair of noise-cancelling headphones and can be quite effective. There’s also dual-zone climate-control air-conditioning, with controls familiar from the Mercedes A-Class. The Luxe Tech model adds an 'around view' camera system and automatic parking, as well as keyless entry and go.

The QX30 is a practical small hatchback, but it’s no SUV.

Opinion about the practicality of the QX30 will be dictated by whether you consider it a hatchback or an SUV. When compared to the SUVs that make up its competition, its shortage of space inside is something of a handicap and has a marked effect on its overall practicality.

The boot itself measures at 430 litres, which is 51 litres less volume than the Mercedes GLA, despite the fact that the two share plenty of parts under the metal. The boot opening itself is more akin to a luxury hatchback than a 4x4. Although it's wide enough for most everyday tasks, an SUV often carries unpredictably bulky loads which the QX30 would struggle to take.

It’s decent by the standards of other small premium hatchbacks, almost 90 litres bigger than the Mercedes A-Class and beating the BMW 1-Series and Audi A3, too. It also scores over the Volvo V40 Cross Country, another car which tries to fuse the appeal of a normal car and an SUV.

In terms of interior space, the QX30 is largely unchanged from the regular Q30, although the increased height above the ground brings with it improvements in ease of access, as well as a higher boot floor. It does also have integrated roof rails which enables the easy fitment, for example, of a roof box or bike carrier.

The QX30 rates well as versatile car for daily use, but it can’t offer the same degree of all-purpose functionality as bulkier, more conventional SUV offerings.

Infiniti has yet to appear in our annual Driver Power customer satisfaction survey, no doubt due to the fact that it's a relative newcomer to the UK. As more owners return information we're sure to have a good picture of the QX30 before long. Infiniti is, though, an arm of Nissan, which doesn’t have the best record in our survey, placing just 20th overall in our 2017 survey.

In contrast, safety isn’t in doubt. The QX30 hasn’t yet been specifically rated, but the Q30 from which it's derived received the full five-star rating in independent Euro NCAP crash testing.

Traffic-sign recognition is standard, as is forward-collision warning and an autonomous braking system, together with lane-departure warning. Blind-spot monitoring and active cruise control, which automatically maintains a safe distance from the car in front, are both available.

With such a high level of interior equipment, together with a standard-fit seven-speed automatic gearbox and four-wheel-drive system, the Infiniti QX30 was never likely to be a cheap car. It comes loaded with technology such as a seven-inch touchscreen-operated infotainment system including navigation, DAB radio and voice control. There’s also leather throughout, a reversing camera and 18-inch alloys.

However, the resultant price puts it in direct competition against cars like the Mercedes GLA and Audi Q3, cars which are notably more practical thanks to their bulkier shapes. And if you don’t need four-wheel-drive, a well equipped BMW X1 can be bought for similar money.

This does rather narrow the appeal of the QX30, as more conventional premium hatchbacks are available for a lot less. However, there’s bound to be somebody out there for whom it offers the right blend of style, equipment and comfort even on rough road surfaces. 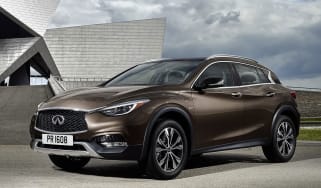