The Kia Picanto has always offered an interior that could be described as ‘functional’ and ‘robust’ but not one that has been especially pleasing to look at or sit in. No doubt spurred on by increasingly competitive rivals, Kia has paid considerable attention to the way the Picanto looks and feels inside.

The latest Picanto is a lot more visually pleasing inside than previous generations, and the materials it’s built from pass muster, too. Although most of the surfaces are shiny and hard rather than soft and tactile, few of its direct competitors are much better in this respect – although the Hyundai i10 has a rather brighter, airier feel. The X-Line version gets some fun additions, too, with lime-green stitching for the steering wheel, gear gaiter and armrests, along with grey synthetic leather upholstery.

Comfort is impressive, too. Picantos with 15-inch wheels have a compliant ride that manages to avoid feeling overly soft – all but the most severe of urban potholes are rounded off nicely and won't shock passengers, while the high-speed ride is well cushioned without being so spongy as to induce motion sickness.

Things are a little different when 16-inch wheels are fitted, though – on these the Picanto rides noticeably more harshly, even with the raised suspension fitted to the X-Line trim. 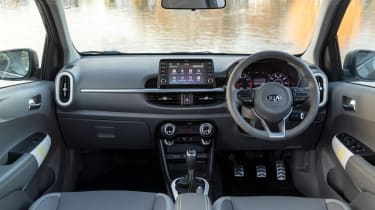 The latest Picanto’s dashboard is a lot more up-to-date than that of its predecessor, as its grey mass is broken up by horizontal trim. Details such as the surrounds to the outer air vents add visual interest. Even the steering wheel itself has a far more contemporary design than previous Picantos.

The dials are arranged in a hooded binnacle and are clear and easy to read. There’s an information panel between them that displays info like fuel consumption and range remaining, as well as if any doors aren’t shut properly.

All controls are easy to reach and the general layout is straightforward and easily understood. Those controls that are expected to be used the most often – such as radio controls – are mounted closer to the steering wheel, which is also fitted with control buttons on higher-spec models. 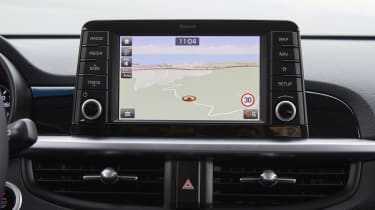 The entry-level 1 model is distinguished on the outside by its 14-inch steel wheels and plastic covers, but the visual appeal quickly builds as you ascend through the trim levels. The cheapest grade does include front electric windows, remote central locking, a USB port and hill-start assist, but going for the 2 model adds essential features like Bluetooth connectivity, air conditioning, steering wheel audio controls and a height-adjustable driver’s seat.

Upgrading to Titanium Edition or 3 trims brings a very impressive infotainment system. It uses a seven-inch touchscreen and provides sat nav with 3D mapping (3 trim and above). It also provides Apple CarPlay and Android Auto connectivity, as well as Bluetooth for hands-free calling. We reckon this system is among the best in any city car, especially as some cars only come with a holder to mount your smartphone. Going for the 3 version also adds climate control, cruise control, parking sensors and forward collision avoidance.

The GT-Line model has an eye-catching set of 16-inch alloy wheels and sporty stainless-steel pedals, as well as black and red artificial leather seats that look a lot classier than they sound. It also offers a choice of five colour packs, each of which add a real dose of colour to the Kia’s otherwise sombre interior. The X-Line offers the aforementioned grey leather-style seats, along with a tougher exterior design and some tweaks to lift the interior.

The GT-Line S blends features of the 3 with the sporty styling and suspension modifications of the GT-Line. Many, though, will see the 3 as offering better value. The X-Line S trim adds to the X-Line’s roster with features including an electric sunroof, chrome door handles, automatic air-conditioning, cruise control, heated front seats and steering wheel and keyless engine start.