The impressively practical Picanto makes the most of its small size

There’s only so much that Kia can do in practicality terms with a car that occupies a patch of road as small as the Picanto, and the previous generation was never the most accommodating small car. Nevertheless, the latest model offers a far more versatile interior than before, without being any bigger on the outside. 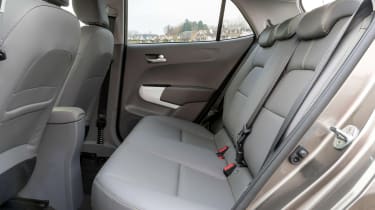 Compared to the previous model, the latest Picanto has had the distance between the front and rear wheels increased and this has had a noticeable effect on interior space. Those in the front enjoy a lot more space around their legs, helped by the lower edge of the dashboard being raised by 15mm. It’s disappointing that there’s no height adjustment for the driver’s seat on the cheapest trim level, but a comfortable driving position is still easily obtained. All-round visibility is very good, too.

Rear-seat passengers can recline in surprising comfort, thanks to the relatively steep angle of the rear seatback. The increase in wheelbase has had a really positive effect on passenger legroom – although it’s still snug for four adults it no longer feels like punishment.

There’s a decent amount of interior storage space, too, with a centre compartment that can take a one-litre water bottle, shelves at the base of the centre console and a pair of cup-holders that can be retracted when not in use. 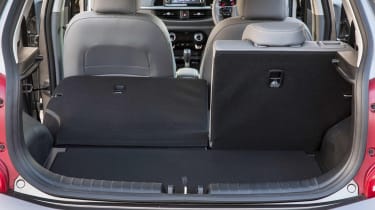 Despite the passenger compartment growing, Kia has still managed to give the latest Picanto a decent boot. Its 255-litre capacity beats most rivals and can challenge some cars in the next category up. And, although the Ford Ka+ has a bigger boot when its rear seats are in place, the Picanto’s 1,010-litre capacity with the seats folded flat comfortably outstrips that of the Ford.