The interior of the NX is striking, but the SUV's angular exterior design is only really reflected in the raised climate control panel. In typical Lexus fashion, everything feels solid and luxurious, with plush materials and supportive seats.

Attention to detail comes in the shape of a portable vanity mirror on the back of the central armrest’s storage bin lid, plus there’s a touchpad to control the car’s infotainment system, which has been made bigger and was given a handy palm rest as part of the 2017 update 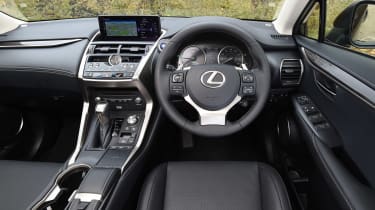 Though it’s better than Lexus’ old ‘mouse’ system, the NX's infotainment touchpad still isn’t quite as accurate or intuitive to use as the rotary controllers used by the Audi MMI, BMW iDrive and Mercedes COMAND systems. The 2017 update brought toggle switches for the centre console, which Lexus claimed were easier to use on the move, and a larger analogue clock with bolder graphics and automatic adjustment via a GPS signal.

Standard Lexus NXs have an acceptable ride, however, you’ll find that the racy Lexus NX F Sport version upsets any serenity with suspension that, though adjustable, is unnecessarily firm over bumps.

The NX 300h comes in several different trim levels: SE, Sport, Luxury, F Sport and range-topping Premier. If you love the looks of the F Sport, but don’t want to compromise on luxury kit, there’s also an F Sport with Premier Pack edition. 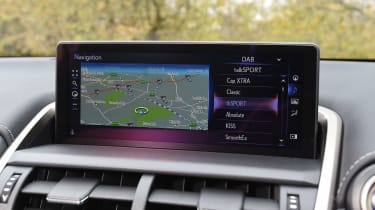