The Lexus NX's raised suspension and high driving position give you a commanding view of the road ahead, while you also enjoy a wide range of seat and steering-wheel adjustment.

There’s plenty of room for occupants in the front two seats, but rear passengers will find the NX a little more cramped. That’s because they sit a bit higher, like tiered with cinema-style seating. This is intended to give those in the back a better view ahead and could help people who suffer from travel sickness. But the raised seats mean headroom is reduced, while choosing the full-length panoramic sunroof eats into the available space even further. 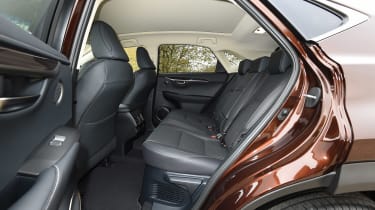 On the plus side, the NX’s floor is almost completely flat, meaning passengers sitting in the middle rear seat will be as comfortable as those in the outer two, with plenty of space for their feet.

Elsewhere in the cabin, you’ll find lots of useful storage spaces, including some large door bins, a cooled glovebox and a lidded cubby between the front seats. The NX has a button-operated electric handbrake, meaning the centre console is freed up for a pair of large cup-holders.

In the UK market, the Lexus NX offers a 475-litre boot. Some markets get 580 litres of luggage space, but in the UK, Lexus has made the decision to sacrifice underfloor storage in favour of a space-saver spare wheel – which we think is a far better option than a tyre-repair kit. As such, the NX has a slightly smaller boot than the BMW X3 and Audi Q5, which have an identical 550 litres.

Despite being quite small, the boot is partially redeemed by having a usefully flat floor, with a smooth loading lip to slide heavy or awkward items over. An automatically opening and closing bootlid is standard on F Sport and Premier models, but its excessively slow operation quickly gets tiresome. 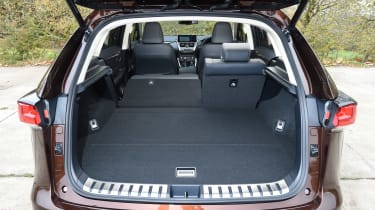 An automatically opening and closing bootlid is standard on F Sport and Premier models, but its excessively slow operation quickly gets tiresome.

The Lexus NX is capable of hauling a maximum braked trailer weight of 1,500kg but, if you’re looking at used models without four-wheel-drive, it’s important to note that they can only tow 650kg, which will only cover small trailers. This could be a stumbling block for potential owners who tow a caravan or horsebox, because the BMW X3 and Audi Q5 can both tow up to 2,400kg.