The Lexus NX driving experience is something of a mixed bag. While the ride is comfortable on the motorway, the suspension feels firm around town and the light controls give you very little feedback. The NX isn’t as composed and grippy as rivals such as the Jaguar F-Pace, Alfa Romeo Stelvio or BMW X3, while the F Sport trim isn’t much better to drive, but has firmer sports suspension that makes the ride quite hard.

Despite a four-wheel-drive system fitted as standard, the Lexus NX has limited off-road ability. There’s also no hill-descent control or any ability to manually configure the traction-control system for different surfaces. 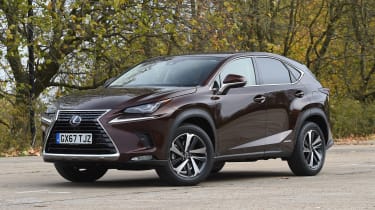 There’s just enough feedback from the steering, but it’s nowhere near as engaging as that of the BMW X3. While there isn't much body lean when cornering, the NX doesn’t offer what you’d call a sporty drive – but neither is it as relaxing as the Volvo XC60 or Mercedes GLC.

The Lexus NX 300h hybrid has a 2.5-litre petrol linked to an electric motor and develops 195bhp – yet it still feels underpowered. It uses a CVT automatic gearbox, which makes the engine drone when you put your foot down, and never supplies the surge of acceleration you'd expect given all the noise it makes. It takes 9.2 seconds to get from 0-62mph, but feels even slower in day-to-day driving, especially compared with punchy turbocharged rivals.

As with the styling, the NX’s driving experience is likely to be an acquired taste. The combination of the hybrid engine and CVT automatic gearbox can be relaxing, yet also intensely frustrating. For instance, if you’re gentle with the throttle, the Lexus will glide around town in near-silent electric mode – although the nickel metal-hydride battery’s range of around a mile looks poor compared to plug-in hybrid models. On the motorway, there’s very little wind and road noise.