Like the Lexus CT hatchback, the NX will be attractive to company-car drivers, thanks to plenty of standard equipment and the sheen of the desirable Lexus badge. It also avoids the 4% surcharge for diesel cars, although its Benefit-in-Kind (BiK) rate is not as good as it used to be.

With the vast majority of the NX’s rivals favouring diesel power, Lexus’ decision to only offer petrol engines weakens the car’s appeal in the UK, although a recent dip in diesel new-car sales could make this less of an issue. As part of the 2017 facelift, the slow-selling turbocharged petrol Lexus NX 200t was dropped from the range, leaving just the Lexus NX 300h hybrid.

The NX 300h claims to offer fuel consumption of 37.7mpg and CO2 emissions of 137g/km – although this figure varies with the bigger wheels of more expensive models. As ever with hybrids, you have to drive carefully if you want to match the official figures, and the CVT automatic gearbox can hold onto high revs for longer than necessary. 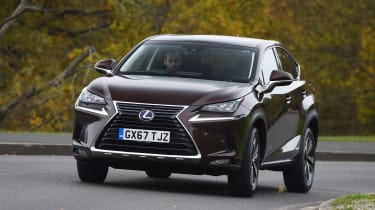 After the first year’s CO2-based road tax (typically included in the on-the-road-price), all hybrid Lexus NX cost £130 a year to tax. Those models with a list price (including options) of more than £40,000 are liable for an additional surcharge of £310 a year in years two to six, bringing the annual bill to £440 during that period.

Lexus NX 300h hybrid models fall into insurance groups 29-33 to 35, depending on the trim level you choose. The Volvo XC60 starts in group 31, while the sporty Jaguar F-Pace is actually cheaper to insure, sitting in groups 31 to 33.