“The Mahindra e2o is one of the cheapest electric cars you can buy, but its low list price doesn’t adequately offset its shortcomings” 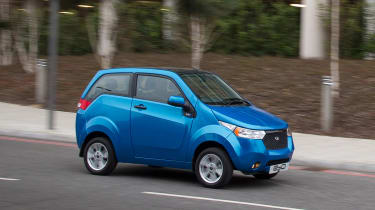 The Mahindra e2o is proof that electric cars have come a long way in the last decade or so – but not in a good way. While the Nissan Leaf drives much like a conventional car and the Tesla Model S can go 300 miles before its batteries require charging, the Mahindra e2o is slow, unenjoyable to drive and has a limited range.

Still, to give Mahindra its due, the e2o is light years ahead of its predecessor, the Reva G-Wiz. The G-Wiz wasn’t technically a car (it was classed as a ‘quadricycle’) and, as a consequence, didn’t come with the mandatory safety systems all cars must have. It’s reassuring to find that the e2o is classed as a car, so you get ISOFIX child-seat mounts, electronic stability control and anti-lock brakes as well as two airbags. Those features may make it safer than the G-Wiz, but they don’t necessarily mean it’s particularly robust: it’s still not clear if the e2o will go through Euro NCAP crash testing, so it’s hard to make an assessment on the level of protection it offers.

The e2o uses a 42bhp electric motor paired with a lithium-ion battery pack to give a range of 79 miles. That’s some way off the 124 miles the Nissan Leaf can manage, and means the e20 is best thought of as a town car. Another factor limiting the type of journeys you’ll want to take is performance. Mahindra doesn’t quote a 0-62mph time for the e2o and, with 0-50mph taking 18 seconds, driving an e2o isn’t for the faint hearted.

The e2o is offered in two trim levels, City and TechX. The latter costs an extra £3,000 and adds heated leather seats, air-conditioning, sat nav, a reversing camera and a handy smartphone app to help you monitor the car’s range and charging status.

There are few cheaper cars to run

The Mahindra e2o may require certain sacrifices, but it does promise almost cost-free motoring. Charging the batteries takes nine hours from a conventional three-pin plug and should set you back a few pounds, though many will want to take advantage of the rapid charging option. You’ll need to specify TechX trim to get this, but do so and the charge time falls to just 90 minutes from one of the UK’s 1,500 dedicated charging stations.

Despite this abundance of charging stations, electric car owners can still suffer from ‘range anxiety’ – the fear being stranded by the side of the road if the car’s batteries run out of power. To counteract this, the e2o has something called ‘revive’ mode, which keeps eight miles of emergency power left in reserve, in addition to the standard 79-mile range.

Do note that the e2o’s actual range will vary depending on a number of factors. Running the air-conditioning will eat into how far you can go, while steep hills also use more power and deplete the batteries faster. Also, due to the way their batteries operate, almost all electric cars have a poorer range when it’s cold. Mahindra is fairly clear that the e2o’s range is reduced in cold conditions, stating that drivers can realistically expect a range of 60-70 miles during warmer months, and 50-60 miles when it’s cooler.

As an electric car, the Mahindra e2o doesn’t emit any carbon dioxide directly. This means you get a government grant towards the purchase price and won’t pay a penny in road tax; e2o owners will also be exempt from the London Congestion charge. If you’re after an environmentally friendly car, the e2o has peerless credentials. In addition to not using any fossil fuels or emitting any carbon dioxide (assuming you buy your electricity from a green provider) Mahindra’s Bangalore factory uses harvested rainwater, natural lighting and solar power, ensuring it’s one of the greenest car production plants on the planet.

Servicing should also be worry-free. The e2o needs inspecting annually or every 10,000 miles - whichever comes first. When it’s time for a service, Mahindra will send out a mobile engineer, whom they say can take care of 90% of the e2o’s maintenance needs.

The e2o only makes sense when you’re driving around town. It may be bigger and more solid the G-Wiz that came before it, but it’s still a very small car so buses and other large vehicles seem to loom over you. The overly light steering doesn’t inspire much confidence, either. The e2o keeps pace with traffic reasonably well at speeds up to about 30mph, but past that speed acceleration is worryingly slow. Although the official top speed is 63mph, reaching it is only for the brave of heart.

The e2o is cheap, and so is its interior

Step inside the e2o and it’s easy to see where money has been saved. The dashboard plastics are cheap and scratchy feeling and, although the asking price is low for an electric car, it’s expensive compared to most petrol or diesel-engined city runabouts. As such, it’s easy to begrudge the overall lack of interior quality. 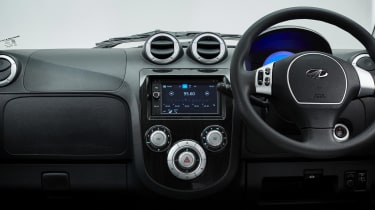 The seats are also hard and uncomfortable. While no one will buy an e2o for high-speed driving, anything but cautious cornering will see you sliding about on the unsupportive seats.

A cramped interior and small boot mean practicality is poor

Four adults can just about squeeze into the e2o, though those in the rear will be cramped and may be glad that the limited battery range means they can only be there for a short while. The rear boot is small and, even with the under-bonnet storage taken into account, overall practicality is limited.

The simple electric motor should be reliable, but safety is more of an unknown

The Mahindra e2o hasn’t been put through Euro NCAP crash tests, so making an assessment of its safety is difficult. Unlike its predecessor, the G-Wiz, the e2o is thankfully classed as a car, so it comes with mandatory safety equipment including anti-lock brakes, electronic stability control and ISOFIX child-seat mounts in the rear. It’s still a very small car, though, and despite these safety features, driving amongst buses and lorries can be disconcerting.

Reliability shouldn’t be too much of a worry, though. Electric motors have very few moving parts compared to a conventional engine, meaning there’s less to go wrong. Mahindra’s three-year/60,000 mile warranty is on a par with most mainstream manufacturers, too.

While a list price of roughly £13,000 (after Government grants) makes the e2o cheap for an electric car, it’s important not to lose sight of the fact that you could buy a well-equipped Ford Fiesta for that sort of money. The basic City model is pretty sparsely equipped, and most buyers are expected to pay the extra £3,000 Mahindra asks for TechX trim. 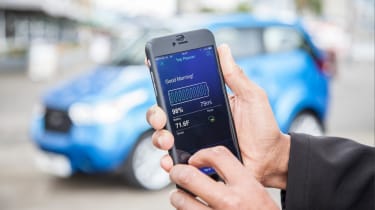 This includes heated leather seats, air-conditioning, a reversing camera, sat nav and a smartphone app that monitors the batteries’ status, and can even pre-heat the e2o for you so it’s warm when you get in.