The Mazda6 is a big car, but it’s efficient for its size and those with an eye on tax bills will welcome its low CO2 emissions

Every car in the Mazda6 range is fitted with i-Stop technology, which cuts the engine when you're stationary in traffic to help save fuel. Higher-spec Sport models also use a system called i-ELOOP, which powers some electrics in Chthe cabin with energy captured from the brakes. This reduces the strain on the engine and further improves fuel economy.

Combining these two technologies with a lightweight body results in some impressive fuel economy figures. For company-car buyers, the top-spec model is very attractive, because it comes with lots of standard kit, so you don't have to raise its tax value by adding costly options. 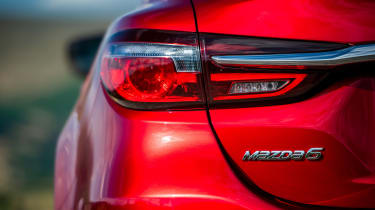 The cleanest Mazda6 is the entry-level 148bhp diesel model, which, despite its 2.2-litre capacity, emits 137g/km of CO2. The more powerful diesel is still very frugal, with average fuel economy of 53.3mpg and CO2 emissions of 140g/km. The latter is also available with an automatic gearbox but efficiency figures are marginally less impressive.

The Mazda6 petrol models aren't quite as talented in this department but are still competitive with most rivals. The entry-level 143bhp 2.0-litre manages 42.2mpg and emits 152g/km of CO2 with a manual gearbox (and slightly worse fuel economy with an automatic), while the 163bhp version also claims 42.2mpg and is only available with a manual gearbox. Plump for the more powerful 2.5-litre and the impact on fuel economy isn't as drastic as you might imagine, with 38.2mpg possible, along with CO2 emissions of 167g/km.

Mazda says its petrol engines come closer to matching their official fuel-economy figures in the real world than those in many other cars, thanks to being larger and not having to work as hard as smaller, turbocharged engines. However, on paper at least, the 1.5-litre turbocharged petrol Vauxhall Insignia Grand Sport has similar fuel economy.

The limited engine range means there are no super-low insurance ratings for the Mazda6, but a spread between groups 18-23 is pretty reasonable. For example, the top-spec Skoda Superb powered by a 2.0-litre diesel falls into group 26, compared to group 26 for the most powerful Mazda6 2.5-litre GT Sport Nav+.

The three-year/60,000-mile warranty on the Mazda6 is competitive with most rivals, but brands like Hyundai, Toyota and Kia all offer more cover at no extra cost.

A trip to the dealership is needed every 12 months or 12,500 miles. While this 12-month schedule is in line with rival cars, the mileage limit is on the short side compared to some models that can cover 20,000 miles between services.

Sport versions come with 19-inch alloy wheels as standard, and these need bigger and more expensive tyres. They’re also relatively easy to damage, so you need to take extra care when parking beside a low kerb or in multi-storey car parks. Mazda offers fixed-price servicing, which costs from as little as £500.