Smart-looking cabin marks the Mazda6 out, while the saloon is spacious and well equipped

Mazda has made big strides in interior design in recent years and the Mazda6's cabin is just as stylish as its exterior. It’s been kept up-to-date, and the latest updates extended to a restyled steering wheel and a neater centre console with tidier climate-control buttons. It makes for a rather less cluttered driving environment than before.

The two front seats are supportive and have a wide range of adjustment to suit most body types, but the seat squabs are a little short, so if you have longer legs you may find them uncomfortable on long trips. The SE-L Lux Nav+ version gets standard heated power-adjustable leather seats, which really add a touch of class to the interior.

As part of its latest round of improvements Mazda has worked hard to reduce interior noise levels, introducing better door seals and more comprehensive sound insulation, as well as laminated side glass. This mutes road and wind noise more effectively than before, but the Mazda6 is still slightly less calm and subdued inside than a Volkswagen Passat. 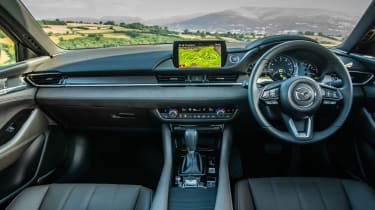 On high-specification examples, the speedometer is replaced by a seven-inch colour display, which simulates an analogue speedometer, with some added information for the cruise control and speed limits. It doesn't offer quite the flexibility of fully digital systems like Audi's Virtual Cockpit, but it's neat, intuitive and easy to use. Meanwhile, the majority of the range retains a conventional analogue dashboard, but every model has a head-up display.

Every Mazda6 comes with an eight-inch colour screen as standard, which can be controlled using either a swivel wheel and shortcut buttons in the centre console or just by touching the screen – whichever you find easiest. It's a relatively straightforward system to master, and now comes with Apple CarPlay and Android Auto compatibility if you prefer a similar experience to that offered by your smartphone.

A USB connection, Bluetooth phone connectivity and a multifunction steering wheel are all included in the SE-L Nav+ trim, as is cruise control. Not many rivals offer so many gadgets in the most basic model.

Metallic paint is optional across the range, although if you want Mazda's trademark 'Soul Red Metallic', it's slightly more expensive than the rest of the metallic choices. There are very few other optional extras, quite unlike the extensive lists offered by Audi, BMW and Mercedes. Instead Mazda steers buyers towards the trim with the kit they need.