The Mazda6 is very enjoyable to drive, thanks to punchy performance and sharp handling that doesn't compromise comfort

You don’t usually think of a family saloon as an entertaining driver's car, but the Mazda6 is a lot of fun from behind the wheel. The brand's engineers have spent time trying to give this big saloon the same agile handling as the Mazda MX-5 roadster. The Mazda6 is a lot heavier than that little convertible, but the steering, pedals and gearbox all have the same beautifully weighted feel that makes the MX-5 so engaging.

The Mazda's ride is on the firm side, even in the entry-level model. This car is at its best on smooth roads, as bumps and potholes can make the wheels thump and bounce. On the plus side, this does mean the handling is great, with excellent agility and plenty of grip from the tyres. If sharp handling isn't important to you, then you're probably better off avoiding the Sport model. Its 19-inch wheels look great, but they make the already-firm ride even stiffer. 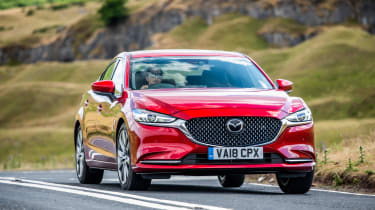 The Mazda6’s latest update introduced a clever new system called G-Vectoring Control (or GVC), which subtly adjusts the engine’s output depending on your steering input. This is intended to help the car corner in a more ‘fluid’ fashion. While this sounds quite racy, in the case of the Mazda6 the technology is used to maximise the car’s stability and comfort during regular driving, rather than making it feel any sportier.

We’re disappointed to report that we didn’t really feel a huge amount of difference when we put the system to the test, but it certainly hasn’t had any ill effects – the Mazda6 is still a long-legged cruiser and has the measure of most rivals when it comes to delivering a rewarding driving experience.

The six-speed automatic gearbox costs around £1,300 more than the manual and is available for the petrols and top diesel. As well as shifting smoothly on its own, it lets you change gears manually using paddles on the steering column. The one downside is it makes the car slightly less fuel-efficient than it is with the standard manual gearbox.

The Mazda6 diesel engines are a highlight of the range, with the 2.2-litre producing enough power to make overtaking almost effortless. In standard 148bhp form, it goes from 0-62mph in 10 seconds, while the 181bhp version offered in Sport Nav+ and GT Sport Nav+ trims is even quicker, taking just 8.5 seconds.

The latest version of this engine uses a clever balancing system to reduce intrusive mechanical noise and we noticed a marked difference when we drove it. While the engine was previously a little gruff and busy when pushed hard, it’s now a great deal smoother and easier on the ears, while remaining punchy and responsive.

The 2.0-litre petrol engine is a little less impressive. Because it doesn't have a turbocharger to give you more power in the mid-range, you need to hold onto gears for longer and it takes a while to get going. The 143bhp version feels a bit underpowered compared to the diesel, but still manages a sub-10-second 0-62mph time, while being agreeably smooth and quiet.

At the top of the range, the 2.5-litre, 191bhp engine reduces that 0-62mph time to 8.1 seconds with an automatic gearbox. It doesn't rev quite as sweetly as the 2.0-litre, though, and doesn't feel a lot more urgent as a result.

Overall, the Mazda6 combines solid performance with reasonable fuel economy, plus it's more engaging than rivals like the VW Passat and Vauxhall Insignia Grand Sport.