As if the Volkswagen Tiguan wasn’t enough, the addition of the Skoda Kodiaq and SEAT Ateca to the latest CX-5’s long list of rivals means it has even tougher competition to live with. The previous model’s interior was attractive to look at, but couldn’t match the quality atmosphere of those cars from the VW Group.

For the latest model, Mazda has chosen to concentrate on improving feel rather than making big changes to the layout. There was nothing much wrong with the latter, so it has been wisely left alone. Most notably, the latest CX-5 is very quiet to travel in, with almost no noise from the tyres or the air as it passes over the car at speed. The CX-5 is very smooth, too, especially on the 17-inch wheels of the SE-L. 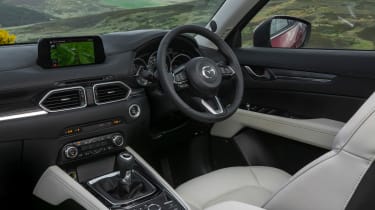 The CX-5’s dashboard has never wanted for visual flair; it actually shares something of the looks of the Mazda MX-5 sports car’s interior. However, while good to look at, it always fell a little short on tactile appeal compared to certain European rivals.

The latest CX-5 has changed that though – its interior is now even better quality than the VW Tiguan’s, having taken a big step forward over the previous model and with arguably more design appeal than the slightly dour German car. The dashboard layout hasn’t changed much – the individually recessed dials are as clear as ever and the major controls are logically placed.

The biggest visual change is that the touchscreen infotainment system now sprouts from the top of the dashboard, where it looks rather neat, and there’s a rotary controller at your disposal to prevent undue stretching to access frequently used functions.

The latest CX-5’s material upgrades are a lot more far-reaching than any design changes have been. If your fingers stray from the steering wheel, they’re likely to encounter soft-feel surfaces in all but the most out-of-the-way locations. The dashboard’s dark expanse is successfully enlivened by subtle chrome highlights that look upmarket rather than tacky.

For the money asked for a CX-5, you won’t feel short-changed by a lack of equipment. Only three trim levels are available and the less expensive SE-L Nav+ is our favourite. It comes with sat nav, DAB radio and smartphone app integration via its seven-inch touchscreen, as well as dual-zone climate control, LED headlamps, 17-inch alloys and autonomous emergency braking (AEB). Apple CarPlay and Android Auto are standard across the CX-5 range.

Upgrading to Sport Nav+ is fairly costly, but brings a leather interior with power-adjustable heated seats up front. There’s a 10-speaker Bose stereo and heated steering wheel, too, while the looks are set off by a set of 19-inch wheels. Although the colour head-up display is a neat touch, none of this finery really makes the Sport any more functional, so we advise saving money and plumping for the great-value SE-L Nav+. The range is topped by the GT Sport Nav+, which adds real-wood interior trim, Nappa leather seats (ventilated and heated up front, while the outer rear seats are heated), a sunroof and a more sophisticated dashboard display.

One thing the Sport Nav does have in its favour is that you can add certain optional safety features that aren’t available on the SE-L Nav. These include blind-spot monitoring and active lane-keeping assistance, which come together as part of a safety pack. Active cruise control is also available on the Sport.

Both models can be chosen with an upgraded infotainment system that offers live traffic and weather reports, as well as fuel price information. There are also a number of dealer-fit options for either trim level, which include illuminated sill strips, luggage storage compartments and protection fittings, as well as additional cup-holders and 12v sockets.