The Mercedes C-Class is an expensive car, but justifies this with a long list of standard equipment. The range starts at around £30,000 for the entry-level C 200 petrol and C 220 d and goes all the way to £77,000 for the C 63 S. As ever with Mercedes, the sky's the limit if you get carried away with optional extras.

The C 200 petrol undergoes the biggest transformation for the facelift, because it’s now fitted with EQ Boost technology. This adds a clever belt-driven generator to the engine that recuperates energy under deceleration and braking, storing it in a small battery. This can then be deployed to give a 14bhp helping hand to the engine, improving performance and fuel-efficiency. The result is 37.7-42.2mpg fuel economy and 153g/km of CO2 emissions for a slightly higher BiK band than the diesel. At first glance, these might not appear particularly noteworthy figures, but not only is the C-Class a fairly big, luxurious model, they’ve also been achieved under the latest WLTP testing method, meaning they should be far easier to replicate in real-world driving.

The C 220 d remains an excellent option for long-distance drivers and is capable of fuel economy of up to 55.4mpg and emissions as low as 131g/km in SE trim, with the flagship AMG Line Night Edition Premium Plus spec car emitting 145g/km. This lags behind the rival 3 Series, which in 320d form is capable of up to 60.1mpg and CO2 emissions of 123-131g/km. 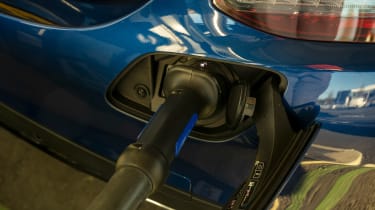 For more surprising fuel-efficiency figures, you'll need a plug-in hybrid, and luckily Mercedes now offers both the petrol C 300 e and diesel C 300 de to cover all the bases. These return official figures of up to 188mpg and 235mpg respectively and boast CO2 emissions of just over 30g/km. This is largely thanks to a 13.5kWh battery, which is able to provide up to 35 miles of electric driving before the combustion engine is required. In practice, the more often you can top-up the batteries and drive short distances, the less petrol or diesel you'll use. On long motorway trips, once the battery is depleted, fuel economy will gradually worsen.

The fact the engine can also switch off while you’re coasting (in Eco mode) should also save you more fuel in certain situations, like driving when on the motorway. Thanks to its almost imperceptible restarting, it’s smooth enough to feel natural from behind the wheel. Charging the battery takes 1.5 hours using a home wallbox.

All petrol and diesel C-Class cost £150 per year to tax, plus a £325 surcharge for five years (paid from the second tax payment onwards) if the list price including options is over £40,000. Plug-in Hybrid models are subject to the same surcharge, but cost £140 per year to tax.

The performance models are naturally the most expensive to insure, with the C 43 4MATIC sitting in group 41 and the flagship C63 S getting the highest ranking in group 48.

The C-Class comes with a three-year/unlimited-mileage warranty – the same as for the BMW 3 Series. This makes both cars a better choice for high-mileage drivers than the Audi A4 or Lexus IS, both of which come with less generous three-year/60,000-mile warranties.

Mercedes offers fixed-price service plans across its range, starting from around £30 a month – that's for two services over two years.