Exterior and interior pictures show sporty rival to Audi A3 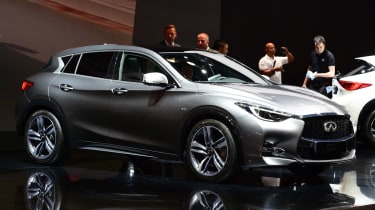 Another car revealed at the Frankfurt Motor Show this week was the Infiniti Q30 compact hatchback. The car will start at £19,780 and will be available to order in the next few weeks.

As with so many of the cars making their debuts in Germany this week, we have been teased by testing shots and concept art for months, but we now have pictures of the car completely revealed, both inside and out. The Q30 is Infiniti’s first foray into the compact premium hatchback class, which is already full of established names.

The Q30 will rival the Audi A3 and BMW 1 Series and is likely to share some mechanical parts with another competitor, the Mercedes A-Class hatchback, as Infiniti has a partnership with Mercedes.

When the premium hatchback goes into production, it’ll be built at the Nissan manufacturing plant in Sunderland, which currently produces the Nissan Qashqai, Nissan Juke and Nissan Leaf, among others. A crossover version of the Q30, called the QX30, will also be produced at the factory.

Infiniti claims the Q30 is a “category-breaking concept,” and describes it as a “Premium Active Compact”.

Infiniti President Roland Krueger said: “The Q30 Active Compact delivers the distinctive design, driving dynamics and individuality that our customers expect of an Infiniti vehicle. With our first-ever entry in the compact-car segment, we continue the product offensive and provide additional options for our discerning customers.”

Check out what our sister magazine Auto Express thought when the car was revealed two years ago:

Until recently, we only had concept images and a ‘mule’ test car to hint at the final design of the new Q30. However, Infiniti released official images of the exterior in mid-July 2015. 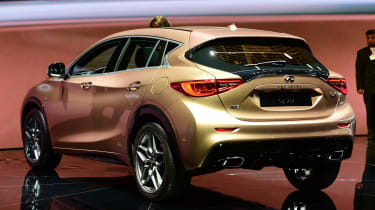 Infiniti, which is owned by Nissan, is hoping to attract younger buyers with this model.

Pictures of the Infiniti Q30 show a large grille and prominent badge at the front of the car, and two creases in the bodywork that run along its side. Large 20-inch alloy wheels and a roof spoiler give it a sporty look.

The latest interior images show that the new Q30’s cabin takes inspiration from larger Infiniti cars, such as the Infiniti Q50 saloon. The central area of the dashboard is neatly laid out and there’s an infotainment screen at the same height as the instrument cluster. The steering wheel is similar to those in other Infiniti models and features a brushed chrome ‘V’ set into the bottom spoke. 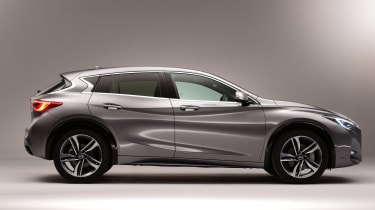 Infiniti has used a material called ‘Dinamica’, which feels similar to suede, to line the roof and pillars inside.

Although not much is currently known about the Q30 engine range, the premium hatchback is likely to use similar engines to those in the Mercedes A-Class, as part of Infiniti’s partnership deal with Mercedes.

Highlights of the A-Class’ range include a 1.5-litre diesel capable of up to 76mpg and the 2.0-litre turbocharged petrol in the Mercedes A45 AMG hot hatchback.

Following the Q30's reveal at this year's Frankfurt Motor Show, Infiniti is aiming to put the premium hatchback into production in late 2015. Prices start from £19,780 for the petrol version and £20,730 for the diesel.

Infiniti will launch the Q30 range with a City Black Edition that has been created as a 'first edition' for the European market. The car will have 'emphasis on the highest quality materials and most advanced technologies', so expect the £26,110 asking price to get you plenty of standard equipment and some unique styling touches. The Q30 City Black Edition will be available to order later this month.

For the full Infiniti range visit the Carbuyer Infiniti reviews page. We'll update this page further when we get new information.