New convertible from McLaren undercuts rivals by as much as £40,000 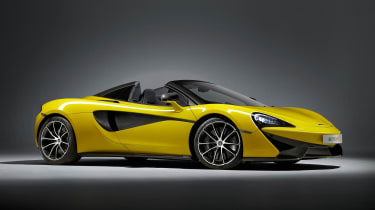 This is the new McLaren 570S Spider. It’s a convertible supercar with a retractable hardtop that competes with cars like the Audi R8 Spyder, as well as loftier models like the Ferrari 488 Spider and the Lamborghini Huracan Spyder.

While describing a supercar as good value is bad taste, the new McLaren 570 Spyder offers such a significant saving compared to rival cars from Ferrari and Lamborghini, some may be tempted by the new British convertible.

True, the McLaren has a power deficit: its twin-turbo 3.8-litre V8 engine produces 562bhp, meaning it’s roughly 40bhp down on the Huracan Spyder and a significant 98bhp shy of the Ferrari's quoted potency – but the McLaren is lighter than both of those cars, so it shares the Huracan Spyder’s 0-62mph time of 3.2 seconds and is only 0.2 seconds slower than the Ferrari.

It might take something of a perspective change to recognise the significance of the price difference difference, but while hypercars like the McLaren P1 and Ferrari LaFerrari are the preserve of the megawealthy (think tens or hundreds of millions in capital, if not more), supercars like the McLaren 570S Spider and Ferrari 488 Spyder are often purchased by those on salaries – big salaries, admittedly, but salaries nonetheless. 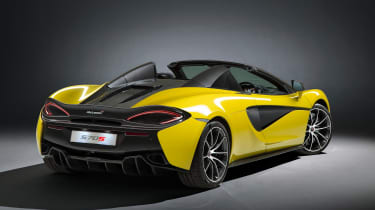 When looking at where to sink their bonuses, City boys and girls may therefore be tempted through the doors of a McLaren showroom rather than a Ferrari or Lamborghini dealership. That c£40,000 saving could represent the difference between monthly repayments of around £3,000 a month for the 488 Spider, to £2,400 a month for the McLaren – not to mention the lower deposits cheaper cars require.

The McLaren 570S Spider joins two other cars in McLaren’s entry-level Sports Series: its coupe brothers, the focussed 570S, and the touring-oriented 570GT. These three cars sit below the recently-released McLaren 720S – itself a Super Series car. 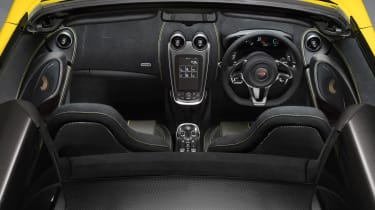 In addition to its 0-62mph time of 3.2 seconds, the 570S Spider will reach 204mph with the roof up and 196mph with it down. McLaren has gone for a two-piece composite retractable hardtop rather than a folding fabric affair, which can be operated in 15 seconds at speeds up to 25mph. The retractable hardtop should ensure the interior is quiet when the roof is up, but it does mean the Spider sports a 46kg weight penalty compared to the coupe – though McLaren says structural rigidity is “unchanged.”

That structural rigidity is largely down to the ‘monocell’ at the heart of the 570S Spider – a carbon-fibre chassis that brings stiffness and strength while delivering low weight. Standard equipment includes carbon-ceramic brakes and six-way adjustable electric memory seats, while the option lists features a sports exhaust, Nappa leather upholstery and the same carbon-fibre shelled seats found in the McLaren P1 hypercar. Economy is officially (and theoretically, given how such cars tend to be driven) pegged at 26.6mpg. 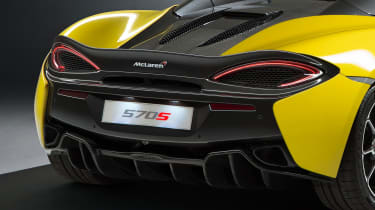 The 570S Spider is available to order now, priced from £164,750. It gets its public unveiling at Goodwood Festival of Speed on 29 July, and first customer deliveries are expected in August.