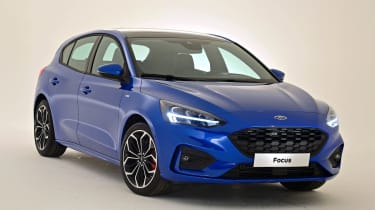 Premium style, sophisticated infotainment and a price tag over £2,000 lower than the previous version – these are the key features of the freshly unveiled 2018 Ford Focus.

The fourth-generation Focus faces a tougher task than ever. It's charged not only with fending off competition from increasingly talented and great-value rivals like the Kia Ceed and Hyundai i30, but also with persuading buyers away from fashionable compact SUVs like the Nissan Qashqai and Renault Kadjar. With prices starting at £17,930 for the entry-level Style specification, the Focus certainly appears to have value on its side. 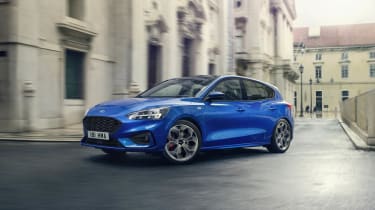 Quality is said to be much-improved, too. Ford claims the new model – built in Germany using modern production techniques – will offer the "best-ever Focus quality and craftsmanship". This should help the car to appeal to would-be BMW 1 Series and Mercedes A-Class buyers, as well as giving it a premium edge over the Volkswagen Golf and Vauxhall Astra – two close rivals that frequently accompany the Focus in the top-10 bestsellers list.

To be in with the best shot of beating the competition, Ford opted for a 'clean sheet' approach to designing the latest Focus, carrying over only a few technical elements from the previous model. Most notable is a far more sculpted exterior, with distinctive contours and prominent hips that lend substance to its hindquarters. The front end, despite smart new split LED headlamps, is immediately recognisable as a Focus – Ford appreciates that not everyone would accept a radical departure from the tried-and-trusted formula that has made this model so popular.

There's little doubt that the latest Focus has a more aspirational look than its predecessor, though; aspects of its appearance closely resemble the BMW 1 Series and Mercedes A-Class that it seeks to steal customers from. A wide choice of alloy wheels and the reappearance of a sporty ST-Line version with more aggressive looks means there's bound to be a Focus for most tastes – and there's a crossover-style Focus Active on its way that promises to inject a little SUV appeal, as well as the usual five-door hatchback and estate models. 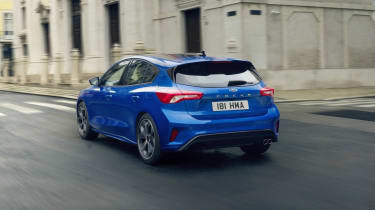 Inside, Ford claims the new Focus offers more space than before, with an improved quality of finish and a new design that echoes that of the smaller Fiesta. The dashboard is dominated by a central eight-inch infotainment screen, while the interior can take on a rugged, sporty or luxurious feel depending on which trim level is specified.

Five trim levels will be offered from launch: Active, ST-Line, Trend, Titanium and Vignale. Active turns the Focus into a crossover, bringing a raised ride height, plastic exterior cladding and practical interior, while ST-Line gives the Focus a sporty edge, with aggressive exterior styling, lowered suspension and a purposeful interior with sports seats. Top-spec Vignale trim focuses on luxury, with leather trim, plenty of standard equipment and refined styling appointments inside and out. 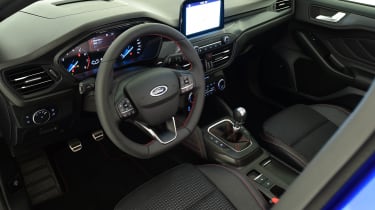 There’s plenty of new technology in the new Focus. Selectable drive modes come as standard, allowing the driver to set the car up to their needs; Ford’s SYNC 3 infotainment system also features on all models, with the option of a wireless charging pad, 4G wi-fi hot spot and a 675-watt, 10-speaker B&O PLAY stereo.

Active safety systems – offered either as standard or as optional equipment – include adaptive cruise control with ‘Stop & Go’, traffic-sign recognition and lane-centring technology to help in heavy traffic, along with adaptive LED headlights that can ‘bend’ around corners. ‘Active Park Assist 2’ is a system that allows the Focus to park autonomously, while ‘Evasive Steering Assist’ helps you to avoid collisions with slow-moving or stationary vehicles. The new Focus also features a head-up display for the first time.

A range of petrol and diesel engines will be offered. Ford’s award-winning 1.0-litre EcoBoost petrol will be available in 84, 99 or 123bhp versions, alongside a 1.5-litre EcoBoost with either 148 or 180bhp. All petrol models get a cylinder-deactivation system to save fuel and improve emissions; full efficiency figures have yet to be released, but Ford claims that the 1.0-litre petrol will emit 108g/km of CO2. 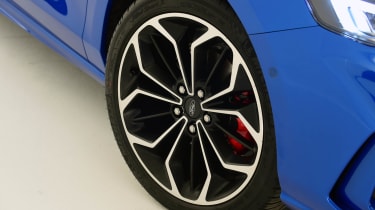 A new 1.5-litre EcoBlue diesel engine will also be available in 94 or 118bhp forms; Ford suggests a figure of 120g/km of CO2 will be possible thanks to the engine’s technology.

Overall, Ford claims that the new Focus offers a 10% improvement in both fuel-efficiency and CO2 emissions.

Ford will offer the Focus with a new eight-speed automatic gearbox on certain engines. Operated by a rotary controller on the centre console, the new gearbox will be able to identify conditions like hills and hard cornering to offer the best timing for gearshifts, as well as offering smoother or quicker shifts depending on driving style.

As proof of just how ambitious Ford is for the new Focus, the entry-level Focus Style starts at just £17,990 – over £2,000 less than the previous model. That aligns it with the SEAT Leon and Skoda Octavia, with a P11D value that'll see it appear on more company-car lists than it did before.

Private buyers may prefer the better-equipped Zetec, which starts at £19,300 – some £850 less than the outgoing version. The sporty-looking £21,750 ST-Line will be a popular choice – you can see it at the top of this page. A luxurious Vignale edition crowns the range at £25,450. Note that these prices refer to the entry-level engine.

All the talk is of SUVs and crossovers at the moment, but more traditional family hatchbacks like the Ford Focus remain huge sellers. In recent times, Ford Focus sales have slipped behind those of its key rival the Volkswagen Golf – they were the third and second best-selling models in the UK respectively in 2017 – but Ford will be aiming for nothing less than top spot for this all-new Focus.

You can put your order in now, but it’ll be the second half of 2018 before we see the new Ford Focus in showrooms and that represents an opportunity for UK car buyers. The current Focus has been on sale since 2011, but is still a fine car, retaining a 3.6-star Carbuyer rating. Dealers will be keen to sell the stock they have in the run-up to the new model’s arrival, so there'll doubtless be special offers and room for negotiation on prices and finance deals. There’s every chance you could pick up a bargain.